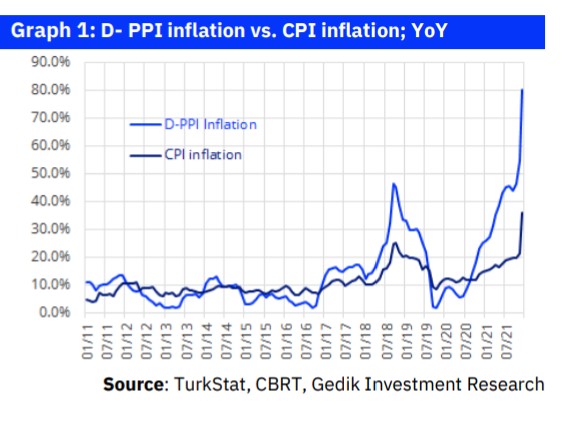 Looking into details, we actually see that there are significant price hikes almost in the entire inflation basket. Food inflation was 16.0% MoM vs. our 18.0% projection, which largely explains the slight deviation in our headline inflation estimate, as core inflation (group C) at 13.2% was in line with our 13.6% estimate. The largest price hikes were witnessed in the durable goods component with a 30% MoM rise, as a reflection of the sell-off in TL. Other core goods inflation (largely consists of fast consumer goods and non-durables) was also very high at 13.4%, although this points to a weaker currency passthrough.

Services inflation was 5.3% MoM as it is actually affected from currency movements with some lag and with a weaker passthrough, thereby pulling down the headline CPI inflation to a certain extent. Yet, services inflation on a YoY basis still rose significantly to 22.3% from 16.9%. Energy inflation was 9.8% MoM, attributable to the more than 20% hike in petroleum prices, which was also in line with expectations. Finally, there was a 11.2% MoM hike in the tobacco& alcohol component, attributable to the recent cigarette price hike.

The Energy Market Regulatory Authority announced that electricity prices were increased by 52% for consumption amounts up to 150 kwh per month and by 127% for above 150 kwh. This is likely to lead to some 75% hike in electricity tariffs on average. Separately, BOTAS decided to hike natural gas prices by 25% for consumers. In addition to those, auto gas (LPG), diesel and gasoline prices were hiked by 10-11% over the past couple of days, bringing the cumulative price hikes since mid-November to about 50-60%. We calculate that the electricity and natural gas price hikes are likely to make about 2.5% direct impact on January CPI inflation, while the contribution of the recent petroleum price hikes are likely to reach some 2.0%, with about 0.7% to be reflected in January. As a result, we calculate the direct impact of the recent energy price hikes on headline CPI inflation at about 5.5-6.0%, including the hikes in other items, such as coal, firewood, tube gas, etc. Yet, the total contribution including the indirect effects on other components may actually reach about 10.0% (or probably more) over time.

CP inflation path will continue to be determined by currency developments. In case the USD/TL rate is stabilized around these levels, we would still expect YoY CPI rise further to above 40% within 1Q22, due to the lagged impacts of TL’s depreciation and energy price hikes (e.g.: on services inflation). Although, the USD/TL rate has come down significantly from the peak level on 20 Dec, excessive volatility remains intact, which poses significant uncertainty for our inflation forecasts. Note that the market assumes that USD/TL will stabilize somewhere between 11.0 and 14.0 within 2022. Yet, the lower and upper bounds of these uncertainty band actually imply extremely different inflation outcomes. For instance, if the USD/TL rate is stabilized at around 11.0 in 2022 (and by year-end), we would expect end-2022 CPI inflation at roughly 12-13% (with a year-average of 30-32), while a USD/TL rate of 14.0 (or slightly above) would mean that CPI inflation may be close to 30% by end-2022 (with a year-average of 40-42%).