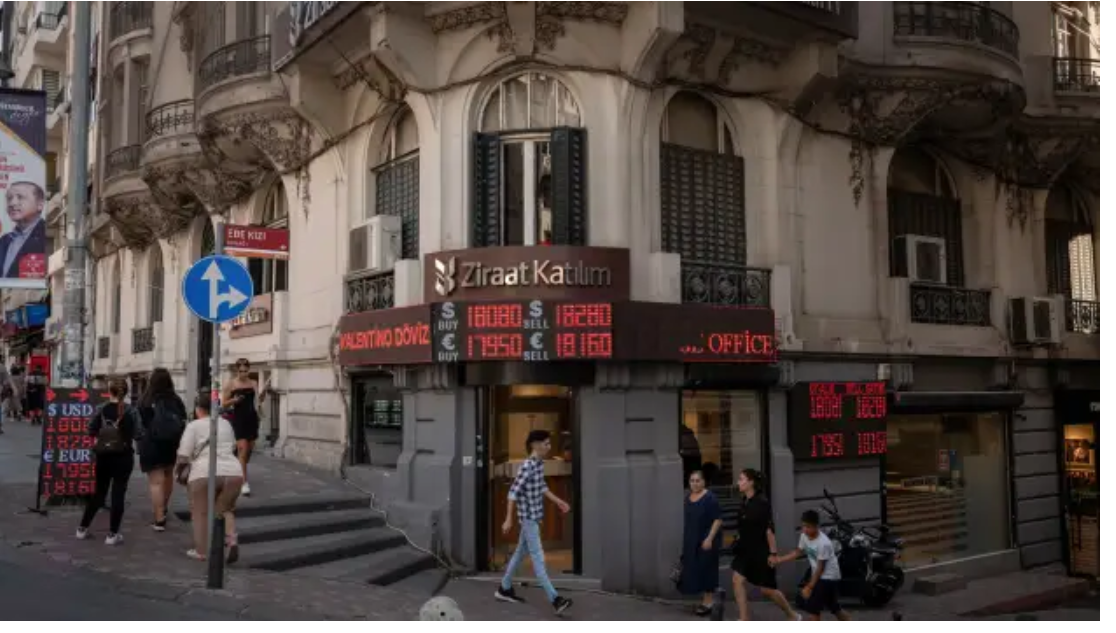 NOTICE:  As we prepared this article for  publication, Central Bank slashed interest rates by another 100 basis point, with dollar/TL climbing to 18.38-39.  We speculate Central Bank is selling FX to stabilize the exchange rate.

Now, back to what CNBC had said about Turkish Lira

The Turkish lira hit a new record low on Thursday, trading at 18.377 against the dollar at 11:30 a.m. in Istanbul and continuing its downward slide of more than 27% against the greenback this year.

The drop comes as investors are bracing for another potential interest rate cut – or simply a hold on the current rate – as Turkey refuses to follow economic orthodoxy in battling its soaring inflation, now at more than 80%.

Or indeed, the investors that can still stomach Turkey’s market volatility.

The Eurasian hub of 84 million people – which many major banks in Europe and the Middle East still have sizable exposure to, and which is highly exposed to geopolitical tensions – witnessed major market turbulence in recent days, on top of the dramatic currency drops of the last few years.

This week saw a major rout in Turkey’s stock market, the Borsa Istanbul, with Turkish banking stocks diving 35% over the week ending last Monday, after clocking a stratospheric 150% rally between mid-July and mid-September. It prompted regulators and brokers to hold an emergency meeting, though ultimately they decided not to intervene in the market.

The cause of the volatility? First, Turkey’s high inflation had pushed investors to pour their money into stocks to protect the value of their assets. But it was fear of higher U.S. inflation, and consequent rate hikes from the Federal Reserve, that likely triggered the sudden downward turn, analysts believe.

The drop wiped out more than $12.1 billion in market value from the country’s publicly-listed banks.

This is because higher interest rates set by the U.S. and a resulting stronger dollar spell trouble for emerging markets like Turkey that import their energy supplies in dollars and have large dollar-denominated debts, and thus will have to pay more for them.

How Fed monetary policy hurts Turkey (and most Emerging Markets)

The market rout prompted margin calls, which is when brokerages require investors to add money into their positions to buffer the losses in stocks they bought on “margin,” or borrowed money. That caused the selling to spiral further, until Turkey’s main clearing house, Takasbank, announced on Tuesday an easing of requirements for the collateral payments on margin trading.

Banking stocks and the Borsa as a whole rebounded slightly on the news, with the exchange up 2.43% since Monday’s close as of 2:00 p.m. in Istanbul. The Borsa Istanbul is still up 73.86% year-to-date.

Soaring inflation: what next from the central bank?

But analysts say the exchange’s positive performance is not in line with Turkey’s economic reality, as they look ahead to the Turkish central bank’s interest rate decision on Thursday.

Faced with inflation at just over 80%, Turkey shocked markets in August with an interest rate cut of 100 basis points to 13% – sticking to President Recep Tayyip Erdogan’s staunch belief that interest rates will only increase inflation, counter to widely held economic principles. This is all taking place at a time when much of the world is tightening monetary policy to combat soaring inflation.

Country watchers are predicting another cut, or at most a hold, which likely means more trouble for the Turkish lira and for Turks’ cost of living.

“It’s clear that the Turkish central bank is under political pressure to abide by Erdogan’s looser monetary policy, and it’s clear Erdogan is more focused on growth in Turkey, and not so focused on tackling inflation,” Liam Peach, a senior emerging markets economist at Capital Economics, told CNBC.

“While the Turkish central bank is under such pressure, we think it will continue with this cycle of cutting interest rates for maybe one or two more months … the window of cutting rates is small.”

Economists predict continued high inflation and a further fall in the lira, which has already fallen 27% against the dollar year-to-date, and 53% in the last year.

Erdogan, meanwhile, remains optimistic, predicting that inflation will fall by year-end. “Inflation is not an insurmountable economic threat. I am an economist,” the president said during an interview on Tuesday. Erdogan is not an economist by training.