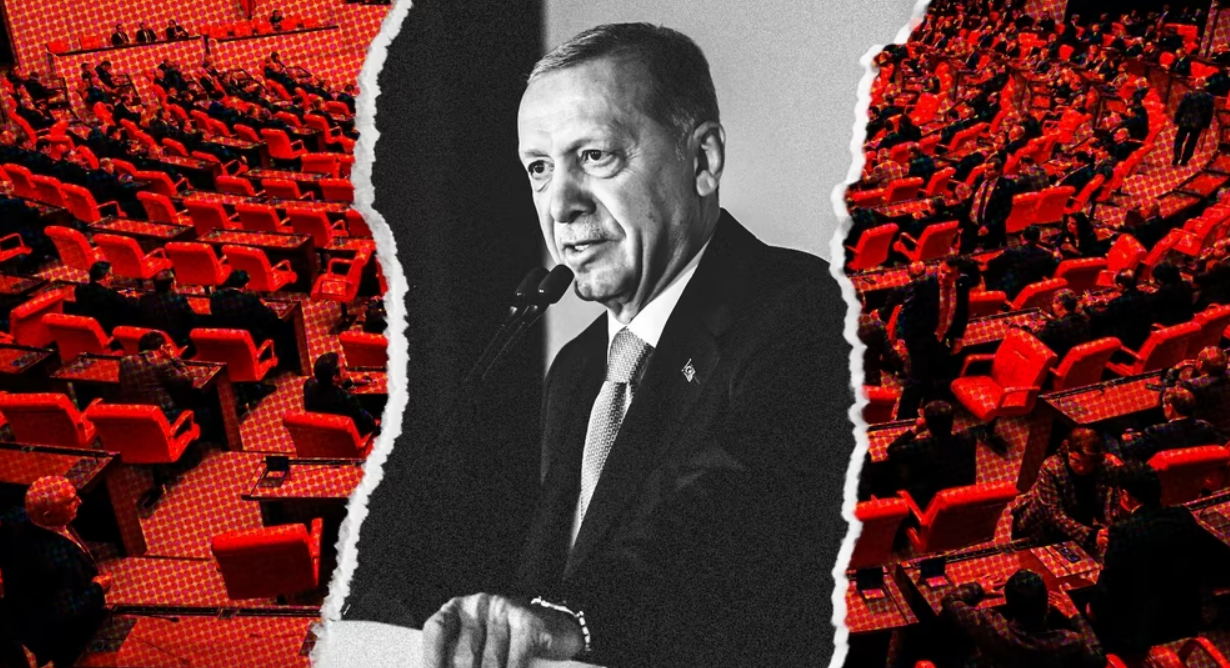 The Turkish leader has held a grip on power for two decades. His departure from the scene would have major consequences.

It might prove to be the most important international election of 2023, and perhaps the most important in the history of the modern Turkish Republic. And as the year begins, polls suggest it may also bring a sea change: After a two-decade-long hold on power, Turkish President Recep Tayyip Erdogan faces the real possibility that he may lose.

The idea that Turkish voters might show him the door carries huge implications for Turkey, the region and the rest of the world, several experts told Grid. Turkey’s status as a NATO member, a pivotal bridge between Europe, the Middle East and Asia, and Erdogan’s own balancing act between Russia and the West when it comes to Ukraine — all these factors give the country a crucial place on the geopolitical map. On Erdogan’s watch, relations with the U.S. have deteriorated, as have ties with Europe. Inside NATO, Erdogan has assumed the role of a wild card, complicating the path to membership in the alliance for Sweden and Finland, and demanding concessions from NATO as the West attempts to mount a united front in the face of the Russian threat.

“Turkey is an important country,” Berk Esen, an international relations expert at Sabanci University in Istanbul, told Grid. “It is not one of the top players in the Global South, like China or India or Brazil, but it has a sizable economy, located in between the European and Asian and African continents, and it is a major Western ally, which has been acting in an increasingly maverick manner within NATO. It’s also hosting nearly 4 million [Syrian] refugees.

“So what happens in Turkey does have real ripple effects, first to the Middle East and Europe, but also globally.”

But it’s a crisis at home that has put Erdogan’s long reign in jeopardy. As prices of everyday goods in Turkey have climbed, the president has continued to slash interest rates — turning economic theory on its head and driving prices higher.

Inflation touched a year-on-year high of 85 percent in October, but while other central banks around the world have raised interest rates to help lower inflation, Erdogan has continued to buck the conventional economic wisdom. The result is an inflation rate that, while off October’s highs, is still in the high double digits, battering the incomes of ordinary people.

“For the opposition, the economic crisis has opened up an opportunity for the first time in many years,” said Emre Erdogan, an expert on Turkish elections and professor at Istanbul’s Bilgi University (and no relation to the president).

The mere possibility of Erdogan’s ouster has surprised many observers and politicians around the world. He has survived multiple crises over the past two decades and over time has steadily concentrated more and more power in the president’s office. Erdogan has also populated the bureaucracy with those loyal to him and his right-wing, nationalist political party, and many dissenting voices have been stifled; most private print and television outlets are now owned by companies with close government links.

Esen, from Sabanci University, said Erdogan has transformed Turkey’s democratic government into a “hyper-presidential system,” in which “parliament is no longer that powerful.”

But Turkey is still a democratic country, with an election now expected in mid-May. And Erdogan might lose.

“It hard to guess exactly how things will change as we are still waiting for the announcement of a common opposition candidate,” Esen said. “But we know that it could be a big change if President Erdogan is not successful.”

Turkey — and the war in Ukraine

The main Turkish alliance of opposition parties occupies the center-left ground in Turkish politics — and while the alliance has yet to choose its main candidate, experts tell Grid that it’s much more interested than Erdogan has been in improving relations with Europe and the U.S.

“It certainly depends on who the main opposition nominates,” said Esen. “But if they win, we are likely to see a rapprochement with the West.”

The most immediate global implications will involve the war in Ukraine.

Were Erdogan to go, that “balancing act” might tip decisively in the Ukrainians’ favor. Throughout the war, Erdogan has played, in essence, a double game. On the one hand, he has supplied weapons to Ukraine, sending armed drones that have helped the resistance against Russia. He has also acted as a middleman between Moscow and Kyiv in talks to allow grain shipments to leave Ukrainian ports.

Between January and July 2022, the value of Russian exports to Turkey stood north of $32 billion — accounting for 15 percent of all Turkish imports. As the West cuts energy ties with Russia, Turkey is among countries that have boosted energy imports from Russia, eyeing cheap resources as its own economy buckles. Diesel supplies from Russia to Turkey, for instance, rose by 25 percent last year, to more than 5 million tons, according to Reuters. Meanwhile, Turkish exports to Russia rose by 45 percent in 2022.

Given the economic dire straits Turkey now finds itself in, a new leader would struggle to sever all ties with Russia. But the post-Erdogan approach would likely change, with Ankara distancing itself from Moscow and stepping up its assistance for Ukraine.

“Under the opposition, Turkey is likely to try to give more support to Ukraine, and move away from Russia, which of course is going to have dramatic consequences for the war,” Esen told Grid.

It’s why, as Professor Erdogan from Bilgi University put it, Putin will be among world leaders paying “close attention” to Turkey’s election.

“There could be a reorienting of Turkish foreign policy” after the poll, he said.

Turkey — and that other war

Beyond Ukraine, that reorienting could impact another conflict zone: Syria.

As Grid has reported, Turkey has had a complicated relationship with its neighbor since the civil war in Syria erupted in 2011. On the one hand, Turkey aggressively supported groups involved in the uprising against the regime of Syrian President Bashar al-Assad, but Turkey has also fought a long-running war against Kurdish groups that straddle the Turkish-Syrian border, and when some of those groups were able to build a semi-autonomous enclave in northern Syria, Erdogan went after them.

His particular obsession has been with the People’s Defense Units (YPG), a predominantly Kurdish group that controls a wide swathe of territory in Northeast Syria. The YPG is affiliated with the Kurdistan Worker’s Party (PKK), which has waged an insurgency against the Turkish government for decades, though they deny being directly linked.

The U.S. lists the PKK as a terrorist group — but, to Erdogan’s chagrin, has been providing assistance to the YPG as part of the campaign against ISIS in Syria. U.S. troops continue to operate in YPG-controlled areas of Syria.

Recently, Erdogan has threatened a fresh incursion into Syria to go after the YPG, and those threats have drawn stern warnings from the United States. Erdogan’s answer was a clear sign of both his interests in Syria and disdain for the West: He responded by saying Ankara did not need anyone’s “permission” to deal with what it saw as a security threat.

Life after Erdogan, when it comes to Syria, might well be less fraught in terms of such threats. The opposition, experts told Grid, is likely to be less bellicose and unlikely to carry out such an incursion, as it seeks to mend ties with the West.

A new, reoriented Turkish foreign policy, one that favors Ukraine over Russia, would of course be welcomed within NATO, where Erdogan’s penchant for bashing the West is most noticeable.

This most immediate issue involves the pending expansion of the alliance. To date, NATO’s plans to bring Sweden and Finland into the security grouping — a clear consequence of NATO unity against Russia — have been stymied by Turkey. Last year, when President Joe Biden hosted the Swedish and Finnish leaders at the White House, their membership was presented as an almost foregone conclusion. “This is, in my view and the view of my team, a momentous day,” Biden said at the May 2022 gathering.

Eight months on, the Swedish and Finnish membership applications remain hostage to Erdogan, who has refused to give his assent. New NATO members must be welcomed unanimously; Erdogan has demanded — as recently as last week — that Sweden and Finland extradite dozens of political opponents he calls “terrorists.”

“First of all, they need to extradite nearly 130 terrorists in order for their bids to pass our parliament,” he said. “Unfortunately, they have yet to do this.”

Among those “terrorists” are an exiled Turkish journalist in Sweden whose extradition was blocked last month by Sweden’s top court. Sweden’s Prime Minister Ulf Kristersson addressed the issue recently by pointing out that his government had no choice but to follow the court’s orders. “Turkey sometimes names people that they would like to have extradited from Sweden,” he said, “and it’s well-known that Swedish legislation on that … is very clear: that courts [make] those decisions, there is no room for changing that.”

The troubles at home

Domestically, the principal challenge for Erdogan is that economic mess — with inflation still at punishing levels.

Here, the likely changes — should Erdogan leave power — are perhaps the clearest. A new government is almost certain to reverse Erdogan’s policies and return to conventional tools such as interest rate hikes to tame inflation and bring some measure of economic stability.

Erdogan’s exit could also set the stage for broader political change in Turkey, as the opposition attempts to dismantle the all-powerful executive presidency he has put in place.

“Right now, the president decides, and that’s it,” Professor Erdogan told Grid. “He has in many areas almost absolute power. The major opposition parties have said they want to change this.”

Of course, making any policy changes will first require a victory — and for that, the opposition will need to unify behind a common face. The alliance has yet to choose its candidate, and as one analyst put it, “there are still challenges when it comes to unity.”

The stakes for Turkey and the outside world are enormous, at a moment that is important for another reason: Later this year, Turkey will celebrate its 100th anniversary as a modern state.

As Professor Erdogan said, “It is a very important election, there is no doubt. And it could be a critical moment in Turkey’s future.”