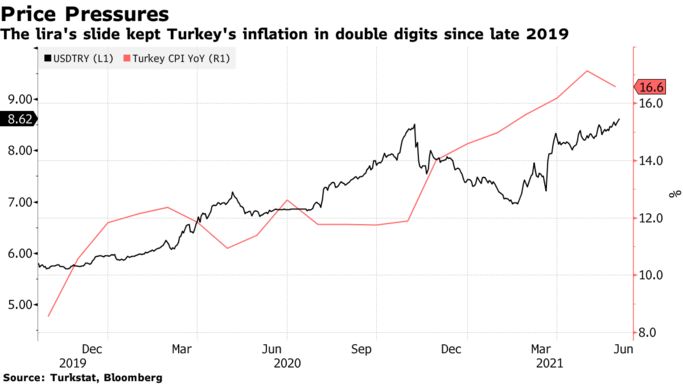 Consumer prices increased an annual 16.6% in May, down from 17.1% the previous month, while the median estimate in a Bloomberg survey of 25 analysts predicted an acceleration to 17.3%. The central bank projects inflation will drop significantly from the end of the third quarter and end the year at 12.2%.

Economists said the unexpected decline was likely a result of the strict coronavirus lockdown imposed in Turkey throughout last month after a surge in cases, while continued lira weakness and rising commodity prices mean it’s too early to start a new cycle of monetary easing.

The monetary authority will see the drop last month “as vindication of its pause in rates and will hope inflation has turned,” said Timothy Ash, a strategist at BlueBay Asset Management in London.“But caution here as these numbers may well have been distorted by the latest Covid lockdown.”

The inflation data came on the heels of Erdogan’s renewed calls for lower interest rates, which sent the lira to a fresh low against the dollar and prompted the central bank governor to push back against expectations of an imminent move. “It’s an imperative that we lower interest rates. For that, we will reach July and August thereabouts so that rates can begin to fall,” the Turkish leader said in an interview with state broadcaster TRT late Tuesday.

The lira weakened around 3% early Wednesday to more than 8.8 per dollar. Hours later, central bank Governor Sahap Kavcioglu tried to contain the damage. “Expectations for an early easing of policy, which aren’t based on a just reasoning, need to disappear,” he told investors, according to a copy of the presentation sent to reporters.

The lira, which is the worst-performing emerging markets currency this year, was trading 0.3% lower against the dollar as of 10:48 a.m. local time.

The president holds the unorthodox belief that lower borrowing costs will help slow price gains as well as stimulating the economy, and he has repeatedly urged the central bank to cut the benchmark rate. He’s pressing his case again as the economic damage wrought by pandemic restrictions, rapid inflation and high unemployment have sharply eroded his popularity and that of the ruling party he controls.

But inflation at more than three times the official target of 5% makes it impossible for Kavcioglu, the bank’s third governor in less than two years, to embark on an easing cycle just yet.

The new wave of lira depreciation after the unexpected removal of a market-friendly central bank governor in March coupled with pressures from global commodity prices could cloud the central bank’s inflation projections for 2021.

“My sense is that this inflation still stays higher for longer and the central bank’s expectations of 12.2% inflation at year-end seem optimistic,” Ash said. “But this will fuel early rate cut calls – after Erdogan pointed to July/August albeit seemingly discounted by Governor Kavcioglu this week.”