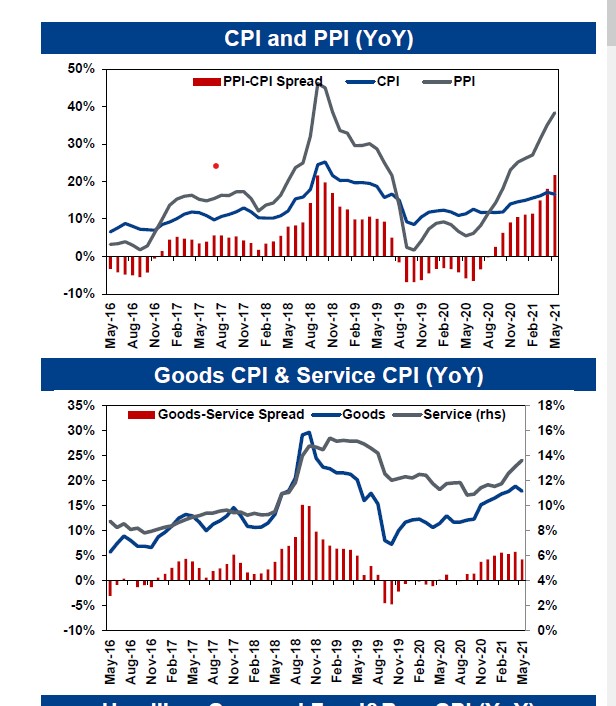 Highest monthly contributions came from transportation (due to the recent special consumption tax raise on fuels and price increase on passenger transport by road), housing (due to natural gas price increases) and clothing & footwear (seasonal factors). We should state that the monthly increase (+1.8%) on clothing & footwear group was remarkably below of the historical averages (+9%).

We should note that FX pass-through impact on was seen on durable goods slightly. Service sector inflation recorded a 1.2% of monthly increase in May (2003-2020 Median: 0.8%). According to the latest figures, YoY goods CPI stood at 17.86% whereas YoY service CPI figure was at 13.62%. Accordingly, goods-service spread decreased from 5.7pps to 4.2pps. In addition to the YoY goods inflation level poses upside risk on the headline figure, level of YoY services inflation could lead to a rigidity on the headline figure during the potential disinflation period.

YoY core CPI indicators, B (excl. unprocessed food, energy, alcoholic bev. tobacco and gold) and C (energy, food and non-alcoholic bev. alcoholic bev., tobacco and gold) indices declined to 17.5% (Prior: 18.1%) and 17% (Prior: 17.8%), respectively.  Hence, the YoY core figures, which are important indicators for the medium term outlook, halted 10-month long upward trend which started in July 2021. However, core figures continued to stay above of headline figure for the 5th consecutive month in yearly basis.

The highest monthly contributions came from basic metals, textiles, chemicals and food products whereas the basic pharmaceutical products were the only negative contributor.

The recent monthly CPI figure which was lower than the minimum forecast of 1.1% on market surveys could backdate the expectations on the timing of the first rate cut to Q3 from Q4. Pandemic related measurements, which put a negative pressure on the demand, could be seen as the key driver of the surprising data. However, we could see an opposite impact on June figures due to the recent normalization actions. Since, the accumulated cost-side pressures could start to be reflected on the prices during this period.

We expect that YoY CPI could be around 16.5-17% until October and a remarkable drop could be seen in November and December due to the basis effect. Our year-end inflation expectation is at 14.9%. We believe the probability of keeping the policy rate stable on June 17 is still high when we take into account both last messages of Governor Kavcıoğlu (he said premature easing does not depend on a fair reason yesterday at the CBRT’s investor meeting) and the significant upward cost-side pressures.

In addition to the inflation outlook, we believe the developments on tourism revenues and the volatility of Lira currency would be important on the timing of the first rate cut. For now, we expect to see the first rate cut in late Q3 and/or early Q4.