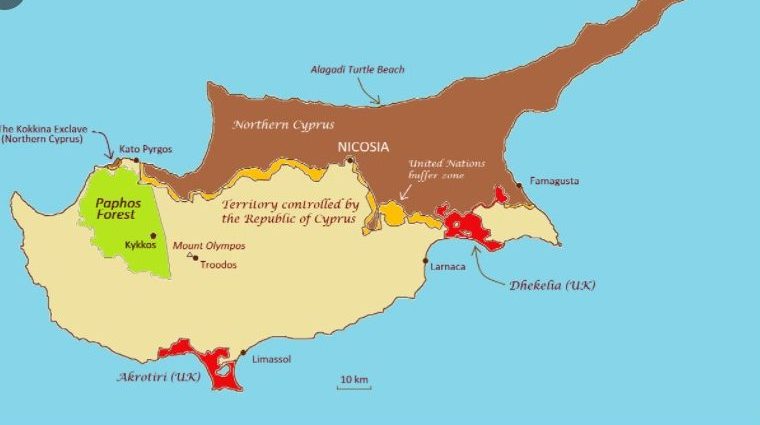 It’s not just the endless failure to reunify the island split by unlawful 1974 invasions that is making more Turkish-Cypriots giving up and leaving, but the faltering economy as the homeland Turkey has record inflation.

In a report, the Cyprus Mail noted the exodus driven by hopelessness in a territory that’s isolated in the world while the other side, the legitimate Greek-Cypriot government that’s a member of the European Union, is recovering economically from the effects of the COVID-19 pandemic.

“From now on, the struggle for life for us, will continue under different conditions in a different geography. Goodbye…” was the post by Turkish-Cypriot Ömer Naşit on social media from the Larnaca airport as he left the island with his family.

It’s not clear how many are leaving, nor where they are going as the economy in Turkey is tanking as well, but the report by Esra Aygin said that, “It would be safe to say that everyone knows at least someone, who has left or is planning to leave.”

It’s not just the dire economy that’s driving them, but social and political problems as the island seems mired in a never-ending clash between the sides, hardline Turkish-Cypriot leader Ersin Tatar saying he doesn’t want reunification, only recognition for the occupied side.

A survey conducted by The Centre for Migration, Identity and Rights Studies (CMIRS) conducted among 500 people this month found that 35 percent of the Turkish-Cypriot population of some 150,000 would leave if they could.

The survey, done every three months, said 94 percent of Turkish-Cypriots are unhappy with developments on their side, no explanation why they elected Tatar in October, 2020, who has made prospects worse for them.

Since the surveys began in 2013, the indicators have gotten worse as well, and now the dissatisfaction is at record levels, said CMIRS Mine Yücel, reporting only 20 percent of Turkish-Cypriots have any confidence.

“This is very alarming for society,” Yücel added. “It is clear that a society that has no confidence or hope in the future is going through a serious depression, and that this will lead to serious social problems,” the report said.

Worried Turkish-Cypriots think the biggest problem is the economy and inflation. Only seven percent of those surveyed said their economic situation was good, their side dependent on troubled Turkey.

“People are very pessimistic regarding their own financial situation and the country’s economic situation,” Yücel said, with 80 percent believing it will get worse for them in the next two years.

The lira lost 44 percent of its value in 2021 and another 22 percent so far in 2022, making it almost valueless, spiking prices for basic goods out of reach for many households, inflation at 118 percent, fuel prices out of sight.

Although the official currency for the Turkish-Cypriot side is the lira – in which salaries are paid – expenses such as rent and school fees are in foreign currencies, making the Turkish currency just paper.

Fed up with the conditions and hardship, thousands of Turkish-Cypriots took to the streets in protests in July, demonstrations organized by trade unions, political parties and civil society organizations, the report noted.