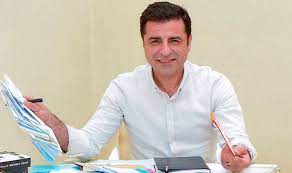 Renowned Kurdish politician has penned an opinion piece for Gazete Duvar from Edirne Prison about the allegations that President Erdoğan did not actually attend university and his diploma is fake.

Jailed former People’s Democratic Party (HDP) co-chair Selahattin Demirtaş has penned an opinion piece for Gazete Duvar in which talks about the allegations that Turkey’s President Recep Tayyip Erdoğan did not actually attend university and his diploma is “fake.”

In his piece named “The President’s diploma” Demirtaş said that all the appointments Erdoğan made, all the laws he signed would become invalid if his diploma actually turns out to be fake.

“Why don’t you have even one friend from university? You placed almost all of your primary and high school friends in the state, but you didn’t place a single university friend? Isn’t it shameful to your friends from university?” asks Demirtaş.

Below is the complete translation of Demirtaş’s piece:

“We are not talking about a simple magazine issue, we are talking about something very serious. The allegations should not be dismissed.

In fact, it doesn’t matter much whether a person has gone to university or not. I know many people who have developed and become competent even though they did not go to university. The situation I am talking about here is whether a very important condition required to assume the most important administrative level of a country has been met.

We will find out the truth after the election. We may face the biggest scandal in the history of modern states. Imagine what would happen if someone who allegedly ran the country on his own for almost 10 years with a fake college degree.

What happens if the diploma turns out to be fake?

I’ll write a few of them.

– Since all the ministers he appointed will be unauthorized, all the actions of those ministers will also become invalid.

– The duty of all ambassadors he appointed would be dismissed.

– The duty of all members of the Constitutional Court (AYM), and the Board of Judges and Prosecutors (HSK) he appointed would be dismissed

– The duty of all governors and rectors he appointed would be dismissed.

– That is, retroactively all of his appointment decrees become invalid. The state bureaucracy collapses in a minute. All embassies and foreign missions of the country become unauthorized.

– All laws enacted by the parliament and approved by the president become invalid. For example, the Istanbul Convention automatically enters into force. (The contract was signed while he was prime minister.)

– All cases of “insulting the president” would be dismissed. Compensation would be paid to those who have been sentenced in these cases.

– All bids given to “gang of five” would be invalid.

So what kind of situation would the president face?

Since presidential immunity will also be lifted, he will be in a position to be tried in a normal court, not in the Constitutional Court. So, there would be no need for a parliamentary decision, which must be approved by at least 400 deputies for the trial of the president.

The salary paid to him during his duty, the expenses of the Palace (presidential building) such as food, drink, heating, cooling, communication, from the fuel of the planes he boarded to the salaries of the flight crew and from the salaries of the guard army from the secret allowance to every penny he spent would be collected from him.

If the diploma is fake, university administrations and members of the High Election Board (YSK), who remained silent, would be also faced with severe sentences.

There are more results than we can count, maybe some of them will be beneficial.

A few questions on university

The opposition needs to plan the transition process with all these possibilities in mind.

Of course, I say all this for the President of Madagascar. Let them not misunderstand and get me in trouble. I don’t want to go to jail.

I would like to end by asking a few questions to the President of Madagascar. Let’s say you have a diploma.

– Why don’t you have even one friend from university? You placed almost all of your primary and high school friends in the state, but you didn’t place a single university friend? Isn’t it shameful to your friends from university?

– Isn’t there a single photograph of you from your university years? Why don’t you have any?

– Why hasn’t a single person come out and said, “We went to university together, we were in the same classroom?”

– Why don’t you have any university memories in your life story?

The last and most important question:

– How many types of pasta can you cook? If you can’t do at least 10 kinds, you definitely didn’t go to university.”