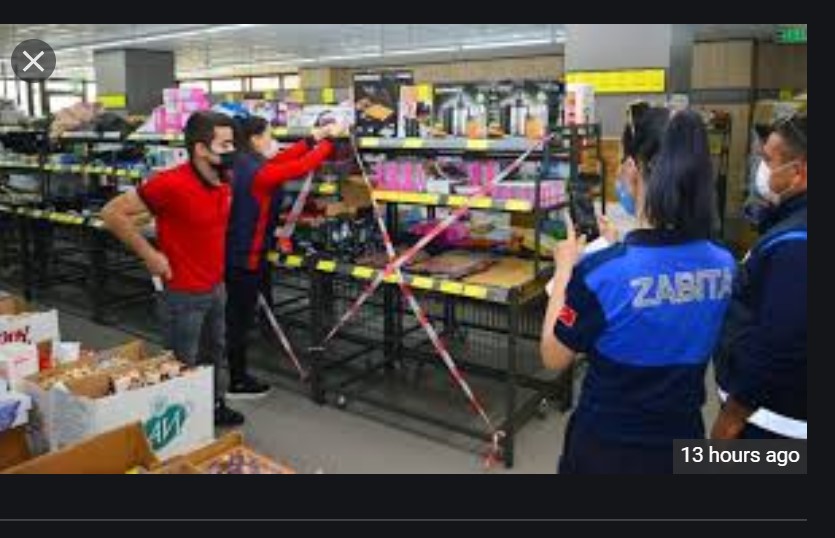 Turkey’s rushed 17-day national lockdown is causing immense confusion and hardship across the nation. President Erdogan probably did not want and certainly did not prepare for the lockdown announced only three days before it went into effect last Thursday, for which there had been no planning. As a result of poor planning, impromptu decrees and regulations issued by the Ministry of Interior on a daily bases, usually contradicting each other have wrecked havoc in daily lives of citizens and commerce.  A new decree bans sales of all non-essential items in markets, but allows farmers markets to open on Saturdays for fresh fruit and vegetable vendors. The latter essentially contradicts the curfew.

Small business owners say they may be forced to break the country’s strict lockdown restrictions, which prohibit the sale of alcohol and the opening of “non-essential” shops, as they cannot afford to lose more than two weeks of business, reports al Jazeera.

Ankara is hoping to stifle the spread of COVID with a 17-day lockdown – the strictest to date – that started last Thursday, ahead of the country’s vital tourist season.

With only chain supermarkets, butcheries, bakeries, greengrocers and dessert shops allowed to trade, the lockdown spells disaster for many independent businesses, which have yet to be given financial support by the government.

Yildiz, 38, lives above an alcohol shop he runs in Istanbul’s Kadikoy Moda neighborhood popular with young liberals and students. He says business had been struggling even before coronavirus hit, as Turkey’s economy struggled. The loss of more business because of the pandemic means he will have no choice but to break the new restrictions.

“If I know someone and they come to my apartment, then I will sell to them because otherwise, I won’t make any money. But if you’re a stranger coming here and asking, I would say no,” he said, adding that the fine if caught is 30,000 Turkish lira ($3,600), more than 10 times the minimum monthly wage.

“They [the government] could have helped us with our social security payments or rent. But they did nothing, less than nothing.”

Yildiz said since the start of the pandemic, he has received two support payments – one of 500 lira ($60) and another of 700 lira ($84), but it did not go far in covering the cost of business lost because of curfews and lockdowns.

He and other merchants say their rent, electricity, gas, and other costs have shot up as inflation hit more than 17 percent in April, but their prices have stayed the same as customers are also struggling to make ends meet.

Critics say the alcohol ban is religiously motivated and that alcohol has little to do with the spread of COVID. The ban will be in place for the last stretch of Ramadan and over Eid al-Fitr, although many are unclear whether the restriction is legally binding.

A source at Istanbul municipality confirmed to Al Jazeera the alcohol ban remains in place.

According to a study by main opposition party CHP, up to 20% of all small food merchants may have liquidated their business in 2020-2021.  Another poll conducted in April reveals 27% of the population is unable to meet food expenditures.

The decision to exempt tourists from restrictions has also been heavily criticised. A Turkish man was arrested over the weekend for swimming in the sea, which has been banned, despite four tourists taking a dip at the time.

Turkey’s case numbers dipped at 24K only to rise to 28K on Tuesday, with patient/case ratio jumping from 10% to 12% in the short span of 3 days despite the lockdown. The country ranks fourth globally in the number of daily cases based on a seven-day average, according to a Reuters tally, and travel warnings remain in place in Germany, the United Kingdom, Bulgaria and Iran.

‘Bored with this stuff’

According to the interior ministry, more than two million work exemption permits have been issued to people working in the manufacturing, food, hygiene and health sectors. The roads and public transport are still busy in some Istanbul neighbourhoods, and tourists are allowed to roam freely, leaving struggling businesses to question whether the damage to their income is necessary, especially during what is normally one of the busiest shopping periods.

Politicians have been criticised for flouting COVID restrictions after a number of ministers from the ruling AK Party, including President Recep Tayyip Erdogan, attended a crowded funeral on Sunday in violation of restrictions limiting attendance to 10. They have also been criticised in the past for holding large party congresses attended by thousands.

Many shops were already ignoring a nightly curfew before the latest lockdown came into effect.

“Before the lockdown, everyone was supposed to close at 6pm, but they stayed open until 7pm or 8pm and no one would say anything. Even the police are bored with this kind of stuff,” said Yildiz.

“The lockdown will not be good for anything. People don’t care any more now, it’s too late… We have bigger problems,” he said, referring to those who fear for the survival of their businesses.

“I have been making less money than I spend because everything is increasing in price – gas, electricity, it all goes up, but whatever I make, it doesn’t go up. I cannot make a living,” he said.

“The price of my stall has increased. Three times more. We owe money to the bank. The government is not providing help. I owe a lot of money on credit cards, and now I can’t make money for almost three weeks. I have five children and I don’t know what to do.”

“We are not scared of corona, we are scared of hunger,” Murat said.

“It doesn’t matter how many people die. The government just does favours for whoever supports them. Whatever happens, it is usually only the poor who are affected, no one else.”