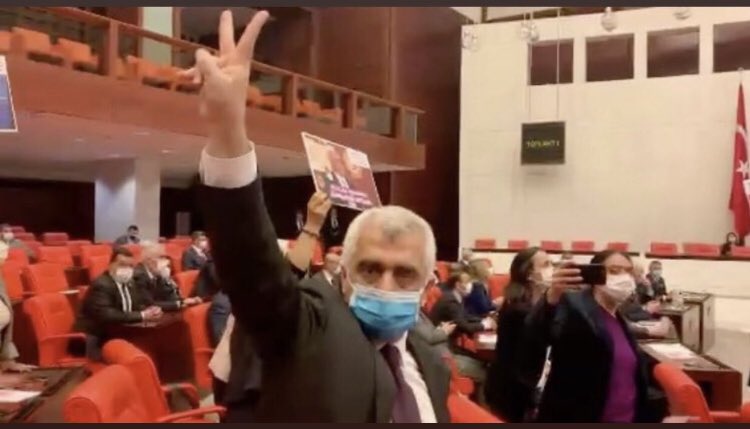 In the latest crackdown on Turkey’s pro-Kurdish opposition party, Turkey on Wednesday stripped a prominent legislator of his parliamentary seat following his conviction over a 2016 social media post. The legislator protested the move and refused to leave parliament.

Omer Faruk Gergerlioglu, a human rights advocate and lawmaker from the People’s Democratic Party, or HDP, was convicted over a social media post which the courts deemed to be terrorist propaganda. An appeals court decision confirming the conviction was read in parliament, leading to his automatic expulsion from the house.

An outspoken critic of the human rights record of President Erdogan’s government, Gergerlioglu maintains that the trial against him was politically-motivated and aimed to silence him. He says he was unjustly stripped of his seat before the Constitutional Court had reviewed his case and has vowed not to leave parliament until the Turkey’s highest court issues its decision.

The move to expel Gergerlioglu triggered a raucous protest in the assembly hall, with HDP legislators banging on desks and accusing Erdogan’s ruling party of an assault on democracy.

“I came here with the 90,000 votes of the people of (northwestern province of) Kocaeli,” Gergeroglu said, addressing journalists watching the proceeding. “I am my party’s legislator and I am not going anywhere,” he said.

HDP legislators remained in the assembly hall in a show of solidarity.

The government accuses the HDP — the third largest party in Turkey’s parliament — of links to the outlawed Kurdistan Workers’ Party, or PKK. Dozens of elected HDP lawmakers and mayors, including former co-chair Selahattin Demirtas, as well as thousands of members have been arrested in a crackdown on the party. Erdogan’s nationalist ally recently called for the party to be closed down.

Two other HDP legislators similarly lost their seats in June. With Gergeroglu’s expulsion, the HDP’s seats in the 600-member parliament dropped to 55.

Hugh Williamson, the Europe and Central Asia director at the New York-based Human Rights Watch said earlier on Wednesday that any move to strip Gergerlioglu of his seat “would look like a reprisal by the Erdogan government for his brave and vocal stance in support of thousands of victims of human rights violations.” “Gergerlioglu’s conviction is a blatant violation of his right to free speech and using it as a pretext to expel him from parliament would show deep disdain for democratic norms and the right to political association,” he said.

The move against Gergerlioglu, a one-time Erdogan supporter who joined the HDP out of disillusionment with the Turkish leader’s increasingly authoritarian style of government, came weeks after Erdogan pledged a series of human rights reforms.

Gergerlioglu, the former head of an Islamist human rights association, has exposed several human rights violations in Turkey, including alleged illegal strip-searches of detainees by police.

He was convicted in 2018 and sentenced to two years and six months in prison for “spreading terrorist propaganda” after he retweeted a news article about a call for peace with the PKK and commented that its jailed leader, Abdullah Ocalan, should be involved. Last month, an appeals court confirmed his conviction.