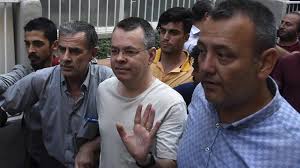 Pastor Andrew Brunson is an evangelical clergyman who had settled in Turkey to teach the Gospel for 20 odd years. He was falsely accused of being an accomplice to the Gulenist terrorist organization and detained. According to many, including  the editors of Real Turkey Channel, he was essentially held hostage for a swap with coup monger Fethullah Gulen, who resides in Pennsylvania, which US refuses to extradite.  It appears that Mr. Trump and Pence are close in their faith to the church Brunson belongs to, meaning they personally inveighed to have him released. Turkey’s President Erdogan refused. Trump threatened devastating sanctions, after which Turkish Lira plummeted. Today, for  different host of reasons, TL has reached the Rubicon once again. What happened in the Pastor Brunson event serves as a guideline to the progression of events likely to transpire this week.  More than currency depreciation, Real Turkey is mindful of the devastating impact on the economy.