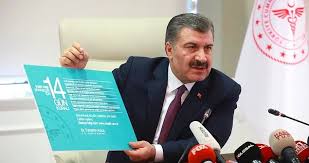 The number of people who have died from COVID-19 in Turkey has risen by 59 in the last 24 hours to 3,520, Health Ministry data showed on Tuesday, as a slowdown in deaths and ICU patients continued.

The overall number of cases rose by 1,832 to 129,491, the data showed, the highest total outside Western Europe, the United States and Russia. A total of 73,285 people have so far recovered from the coronavirus, which causes the respiratory disease COVID-19.

Despite large amount of tests, doubts linger in the minds of many medical experts whether the true prevalence of virus has been discovered in the country. Asymptomatic super-carriers exist in every population subjected to this disease, but there is no universal testing in Turkey.

Financial Times  research reveals  that deaths from Covid-19 may have been underreported too.

Turkey’s death toll from coronavirus could be as much as 25 per cent higher than the government’s official figure, adding the country of 83m people to the raft of nations that have struggled to accurately capture the impact of the pandemic.

Ankara has previously rejected suggestions that municipal data from Istanbul, the epicentre of country’s Covid-19 outbreak, showed there were more deaths from the disease than officially reported.

But an analysis of individual death records by the Financial Times raises questions about the Turkish government’s explanation for a spike in all-cause mortality in the city of almost 16m people.

The FT findings show 3,377 more deaths in Istanbul when compared with the average for the same period in March and April over the previous five years.

Nationwide, all-cause mortality data for Turkey are only available with a lag of more than a year. But the Istanbul figures suggest the true Turkey-wide toll could be as much as 25 per cent higher than the official figure, which stood at 2,706 on April 26, write John-Burn Murdoch and Laura Pitel in the Financial Times article titled “Turkey’s virus deaths may be 25 per cent higher than official figure”, a claim also raised by the CHP mayor of Istanbul, Mr. Ekrem Imamoglu.

The FT analysis supports Mr. Imamoglu’s assertions. It shows that, both before and after the onset of the virus outbreak, people who died in Istanbul but were buried elsewhere were usually logged in the city’s records.

Asked to comment on the findings, Turkey’s health ministry directed the FT to comments made by Mr. Koca during a press conference last week.

The health minister accused some people of trying to “play politics” with the crisis and rejected claims that the official death toll could be incorrect.

He said there had been a small increase in nationwide all-cause mortality this year, which was lower than the official coronavirus death count. “Where are they, these imaginary deaths?” he said.

But Kayihan Pala, a public health expert and a former opposition parliamentary candidate, said deaths due to some other common causes could have dropped during the pandemic. “We also need to examine the secondary effects of measures taken against coronavirus,” he said. “For example, because of the decrease in traffic, deaths linked to traffic accidents may have fallen.”