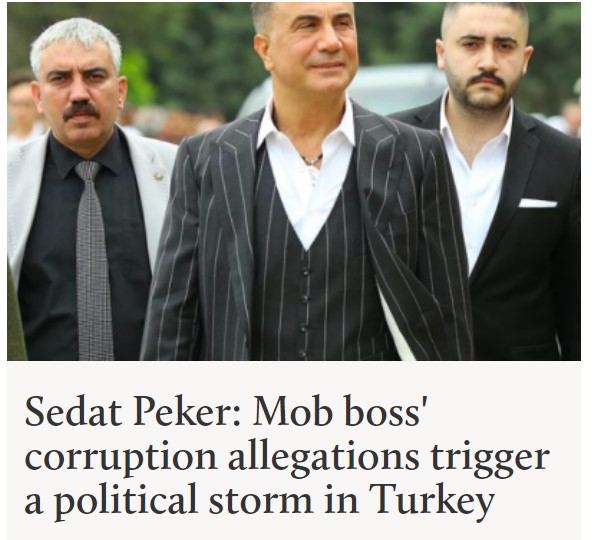 Mr Sedat Peker, the head of one of Turkey’s most powerful mafia groups who has been making shocking revelations since early 2021 about state-mafia relations, drug trafficking and murders implicating state officials and their family members, unveiled a new series of allegations from his Twitter handle, revealing a network of bribery and corruption at Turkey’s stock exchange.  He claims former chairman of the Turkey’s capital markets regulator CMB (SPK) in Turkish has received bribes to approve initial public offerings and capital increases. According to HalkTV.com columnist and economist Baris Soydan, up to $2.3 bn worth of IPOS and capital increase approvals need to be investigated for impropriety.  Main opposite leader (CHP) Kemal Kilicdaroglu has also joined the fray, promising to make good the losses of retail investors, who may have been burned in the circle of bribery.

Here is the background story by Turkish Minute

Peker said AKP deputy Taşkesenlioğlu, her brother and former Capital Markets Board (SPK) chair Ali Fuat Taşkesenlioğlu; advisor to Turkish President Recep Tayyip Erdoğan Serkan Taranoğlu; and pro-government daily Hürriyet columnist Burak Taşçı were all involved in the operation of the bribery network extorting the owners of companies that are listed on the stock exchange.

Peker claimed that Taranoğlu and Taşkesenlioğlu demanded a bribe of 12 million lira ($660,000 as of Aug. 29, 2022) from Mine Tozlu Sineren, the owner of Marka Investment Holding, for processing her company’s request to issue new shares through increasing capital. Sineren corroborated Peker’s allegations in a live broadcast and said no action has been taken by the authorities despite her complaints.

The mafia boss also released video footage that he alleged was of Taşkesenlioğlu and was secretly shot by her husband Ünsal Ban, after she slightly injured him with a knife in their home.