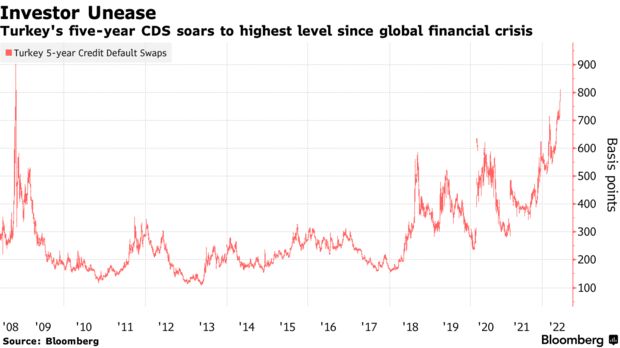 The Turkish lira whipsawed with surging credit-default swaps as investors appeared underwhelmed by the series of steps announced by the government on Thursday night to shore up the currency.

To curb credit growth and support the lira, the central bank will double the reserve requirement ratio for lira-denominated commercial cash loans to 20% while the banking regulator shortened debt repayment periods for consumers. The Treasury and Finance Ministry said it will start assessing demand for the new revenue indexed bonds in an attempt to give the lira greater appeal and deter retail investors from dollar purchases, while vowing to stick to free market rules.

The currency came under renewed pressure after President Recep Tayyip Erdogan’s remark on Monday that further dashed hopes for a rate hike despite soaring inflation. The lira has lost 4.6% this week and is headed for the worst weekly performance of the year.

Erdogan “undermined” the recently announced measures “when he was so explicit earlier this week when he effectively ruled out a return to a more orthodox policy setting, which in the past always has been a necessary condition for a turn in TRY,” said Henrik Gullberg, a macro strategist at Coex Partners Ltd in London. “Instead, he doubled down and argued for further rate cuts,” he said as he questioned the efficacy of the measures.

“Will measures trying to attract retail savings into lira denominated assets succeed, or will attempts to lure foreign investors into Turkish IPOs succeed as long as monetary policy is so unorthodox? I doubt it,” Gullberg said.