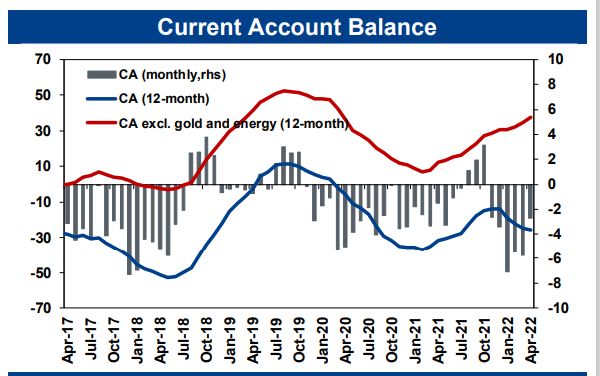 In April, Current Account (CA) posted a monthly deficit of USD2.7bn (Cons.: USD -3.1bn) vs  USD1.5bn  in the same month of the previous year. The main driver of a USD1.2bn of YoY deterioration in the current account was USD1.7bn of rise on the foreign trade deficit (USD 4.4bn). Also, net primary and secondary deficit deteriorated by USD 991mn to USD -1bn. On the other hand, a USD 1.2bn  improvement in net service revenues (USD 2.7bn) limited the monthly deficit. After a bump in May, CA is expected to flatline or even turn into a small surplus over summer months. Because of soaring energy and agri-commodity prices, Turkey’s CA deficit could hover around USD40-45 in the next 12 months, which according to Turkish economists will be tough to finance Turkey’s 5 year CDS premium reached 820 points on Monday, a 15 year high.

Leading indicators suggest 12-month CA deficit continued to increase in May. In addition to the weakness of the Lira currency, increasing trend on commodity prices, especially in energy, lead to significant deterioration in current account figures. This trend is expected to continue in May.

According to temporary figures of the Ministry of Trade, trade deficit was USD10.7bn in May (Apr.22: USD-6.1bn, May.21: -4.2bn). Contribution from the tourism sector in the summer period has a crucial importance on the current account outlook. Our year-end CA deficit to GDP ratio estimate is at 5.3% and upside risks dominate our estimate. BoP figures of May to be announced on July 8.