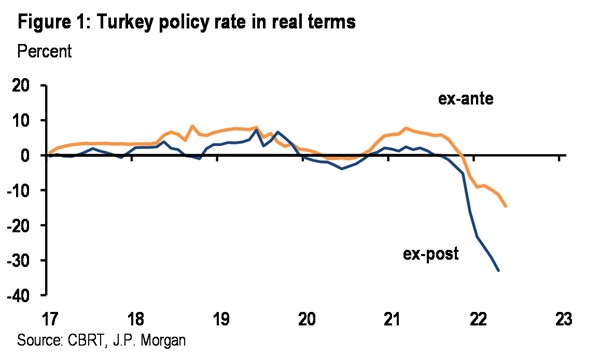 As widely expected, the CBRT left its key policy rate unchanged at 14.0%. Also, as expected, there was no clear policy guidance and the interest rate announcement note was not different to last month’s note in any meaningful way. The CBRT once again put the blame of high and rising inflation on “rising energy costs resulting from geopolitical developments, temporary effects of pricing formations that are not supported by economic fundamentals, strong negative supply shocks caused by the rise in global energy, food and agricultural commodity prices”. Interestingly, the CBRT also did not sound bothered by the tightening in global liquidity and continued to refer to the “supportive monetary stance” of core central banks. The CBRT kept its confidence that the measures already taken (no indication on what these could actually be) along with a resolution in the regional conflicts and strong base effects would lead to disinflation.

We understand that reluctant to use the monetary policy in an orthodox way, the CBRT sees reverse currency substitution and the currency stability this could cause as the only feasible way to fight inflation. In fact, in the only major addition to the interest rate announcement note, the CBRT stated that work on the collateral and liquidity policy actions aimed at “encouraging permanent and strengthened liraization” was finalized and that these measures would be implemented. We expect these measures to be announced within a few days. Although we believe that an orthodox and prudent monetary policy stance would be the easiest way to restore confidence on policies and on the lira, carefully designed measures could potentially result in some initial recovery in local investor sentiment.

The CBRT also stated in the announcement note that long-term investment loans targeted usage of accessed funds for real economic activity was important for financial stability, and towards this end “the Committee will decisively continue to implement the strengthened macroprudential policy set by taking additional measures.” The CBRT has already introduced reserve requirements for loans excluding those for SME, exporters and agricultural firms. We suspect similar measures could be on the table.

To repeat, these measures could provide some respite for the currency or fine tune loan growth. However, given the strength of price pressures and especially the sharp worsening in inflation expectations, more effort is needed to fight inflation, in our view. We continue to expect the CBRT to keep rates unchanged until the end of the year. Elections – that are scheduled to take place in June 2023 if not before – create uncertainty over longer term monetary policy outlook. The risk is still that of an increase in political pressure for lower rates, especially if there is a sharp slowdown in growth.