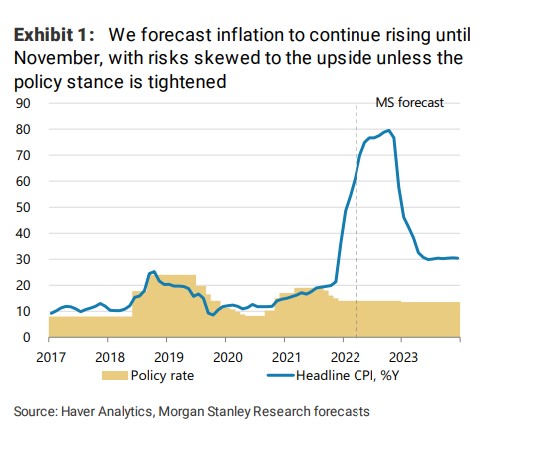 We expect the CBT to stay on hold on May 26, but the need for tightening seems to have increased. Deeply negative real rates continue to feed into the demand for FX, increasing the pressure on official reserves and raising concerns about sustainability. We expect to see some normalisation in real rates, either through the introduction of a new CPI-indexed bond, or an upward adjustment to deposit rates.

We expect the CBT to keep rates on hold as expectation builds around a new CPI-indexed instrument: Despite the increase in the number of regulations and policy measures put in place since the last CBT meeting, deeply negative real rates and a highly accommodative monetary policy stance continue to feed into inflation and the demand for FX. Direct and indirect FX sales by the CBT to keep FX stable have increased the pressure on official reserves and country risk premia, raising concerns about the sustainability of current policies. We see the need for a notable tightening in the monetary policy stance to address macro-stability risks, but we do not expect this to happen through conventional rate hikes, at least until other options such as inflation-indexed bonds for retail investors or an upward adjustment in KKM deposit rates are considered.

Leaning against FX pressures relying on official reserves is not sustainable, in our view, given deeply negative real rates and tightening global financial conditions: While non-residents reduced their lira positions in recent weeks, locals increased their FX deposits despite KKM, adding to the downward pressure on the lira. Foreign outflows and locals’ demand for FX have been met by the CBT at the cost of reserves. Total foreign reserves of the CBT declined by US$5.7 billion in the week to May 13, while net reserves excluding swaps were down by US$3.9 billion – recording the largest weekly declines since late December despite continuous FX purchases through conversions into KKM and FX surrender requirements of exporters and tourism firms. We think that interest rates (either the policy rate or deposit and loan rates)need to be normalised to reduce the pressure on FX, official reserves and risk premia, and to reduce the downside risks to the macroeconomic outlook.