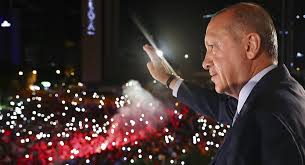 Turkey’s health system achieved considerable success in battling the corona epidemic, but the war is far from over. Only on Friday, new cases approached 2K once again, as two members of the National Science Commission advising the government on combat efforts asserted that opening shopping malls and other ill-thought normalization measures could trigger a second wave.  However, President Erdogan is stuck between preserving public health and the economy.  April Cash budget reports a record TL46.5 billion, or $6.5 billion, with more to come.  Several surveys indicate that aid is not reaching the needs, while unemployment is soaring.  Erdogan is forced to begin normalization earlier than prudence dicates and staged a vicious crack-down on dissidents and the opposition to distract national attention from the spreading economic stress. Will he succeed?  A renown Turkey expert, Mr. Kemal Kirisci assessed Turkey’s economy and Erdogan’s policies in his new Brookings Papers blog “The coronavirus has led to more authoritarianism for Turkey”.  PA Turkey provides excerpt from his findings:

Thus far, Turkey’s response has been marked by a tension between an approach based on science, represented by the minister of health, Fahrettin Koca, and a piecemeal counterpart shaped by Erdogan’s political priorities: perpetuating his one-man rule by saving the economy and keeping his conservative religious base happy. As the country begins to open up, Erdogan’s policies and narrative suggest that the country should expect more of the same authoritarian politics. It is doubtful that this will help to solve Turkey’s persistent economic and political problems that have been exacerbated by the pandemic.

His first priority is to keep his conservative base happy, which led him to allow the pilgrimage, umrah, which brought back the virus from Saudi Arabia. Secondly, he was late in closing down mosques. Hardly a week after the introduction of a ban by the Directorate of Religious Affairs there was a sole Friday prayer for a select few held at the Presidential Palace, allegedly to boost morale. Yet, the back and forth preceding this VIP-only prayer betrayed a considerable degree of confusion in the ranks of the government, which was driven by indecision over whether to follow the teachings of science or religion.

Keeping the economy running is a major concern for Erdogan, as it has been for leaders around the world. In summer 2018, the Turkish economy entered a recession marked by negative growth rates, growing unemployment, and soaring inflation, especially in basic agricultural products just before critical local elections in March 2019. A fragile recovery could be seen by the final quarter of 2019, primarily driven by private consumption supported by monetary easing and fiscal measures. In January 2020, the minister of finance, Berat Albayrak, confidently predicted that the Turkish economy would expand 5% by the end of the year.

The coronavirus has dashed these hopes. Persistent problems such as a constantly weakening currency, high debt, dwindling foreign reserves, and growing unemployment threaten to destroy the Turkish economy. The International Monetary Fund warned that the economy could shrink by 5% and that unemployment could reach over 17% by the end of the year. Travel bans and the contraction in international trade is hitting Turkey’s tourism and export earnings hard, two important drivers of employment and economic growth. This picture has left Erdogan facing a dilemma between saving lives and saving the economy.

The tension between the two became yet another source of inconsistent and piecemeal measures. His initial response to the pandemic on March 18 was marked by a striking contradiction as he called for people to stay at home and avoid travel while announcing a significant tax cut on air travel and hotel industry to spur business at the same time. The response also included an economic stimulus program of $15 billion corresponding to roughly 2% of Turkey’s GDP, admittedly a meager sum compared to the stimulus packages adopted by the United States and the EU. This revealed how the government was caught with very little resources of its own hence the pressure to keep the economy open.

Yet, the steady increase in the coronavirus cases intensified the calls for lockdowns. Initially, those above the age of sixty-five and subsequently those twenty years and below were ordered to stay at home. However, on both occasions the government had to revisit these hastily introduced decisions and allow those with jobs to be excluded from the restriction. This conspicuous tension between the need to prevent the spread of the virus by introducing stricter isolation measures while keeping the economy open reached a peak on April 12 with the resignation of the interior minister, Süleyman Soylu. Less than forty-eight hours earlier, Soylu had unexpectedly issued a weekend curfew under instructions from Erdogan, precipitating a rush to supermarkets and bakeries. The resulting criticism over the failure to coordinate even with the Health Ministry and for effectively undermining significant gains in social distancing led to calls for his resignation.

To project an image of unity, Erdogan rejected Soylu’s resignation, to the delight of his supporters who celebrated the decision in the streets of Istanbul in defiance of social distancing measures. Then, the government, in a unique practice around the world, announced curfews for thirty-one provinces solely for weekends and holidays. This decision, whose effectiveness has been questioned by the Turkish Medical Association, further underscored the tension between saving Turkish lives and saving the Turkish economy.

Since the pandemic, numerous journalists and social media users have been detained on the grounds of disseminating “provocative news,” and a doctor questioning the government’s statistics was forced to apologize for misleading the public. Ordinary individuals have not been spared. A truck driver was detained when he implicitly addressed himself to Erdogan in a viral video recording arguing: “Either I stay at home at your word and die from hunger or I die from the virus. In the end, it’s not the virus but your system that will kill me.” Repression and the silencing of criticism has inevitably led to questions concerning the accuracy of the coronavirus statistics and commentary that the picture in Turkey is much worse than presented by Koca in his daily briefs.

Lastly, since Justice and Development Party candidates in Istanbul and other leading metropolitan cities lost last year’s mayoral elections to opposition parties, Erdogan has systematically undermined and blocked their efforts to fight the coronavirus. The efforts of the Ankara and Istanbul mayors to raise donations from the public were declared illegal, a declaration that violated the law governing the powers of municipalities in Turkey. Additionally, the government opened a criminal probe against the mayors. Simultaneously, Erdogan used the need to thin out Turkey’s overcrowded prisons to prevent the spread of the virus to consolidate his alliance with his ultra-nationalist coalition partner Devlet Bahçeli and his Nationalist Action Party, which has become a vital ally needed to garner the 50% + 1 necessary to win presidential elections. The parliament adopted a partial amnesty law, long desired by the Nationalist Action Party, early in April. The law allows for the release of ninety thousand ordinary criminal convicts while continuing to keep close to fifty thousand imprisoned, including Kavala and Demirtaş, on loosely worded terrorism charges.

The Economist recently published an article which argues that autocrats are using the coronavirus to grab power. But for Erdogan, preventing the coronavirus from eroding his one-man rule and preempting future challenges to it is more important. Thus, it is these goals that cause Erdogan’s approach to appear piecemeal and incremental compared to those adopted by other countries such as Germany, South Korea and Taiwan. Nevertheless, his handling of the crisis so far, at least according to one survey, has received almost 56% approval from the public, an increase of more than fifteen points from February. If his new plans for opening the country proceed smoothly and a resurgence of the virus is prevented, then this support is likely to increase, potentially providing Erdogan the support he needs to further cement his rule.

Moving forward, it is difficult to see how Turkey will be able to recover from the heavy toll that the coronavirus is inflicting on the country and the accompanying deep economic and governance problems. Yet if Erdogan continues to offer more of his authoritarian, one-man rule, recovery will be doubly difficult and likely result in an inward-looking Turkey, bogged down in its own problems and unable to play a constructive role in reconstituting a post–COVID world order that cherishes democracy, the rule of law and sustainable economic development.