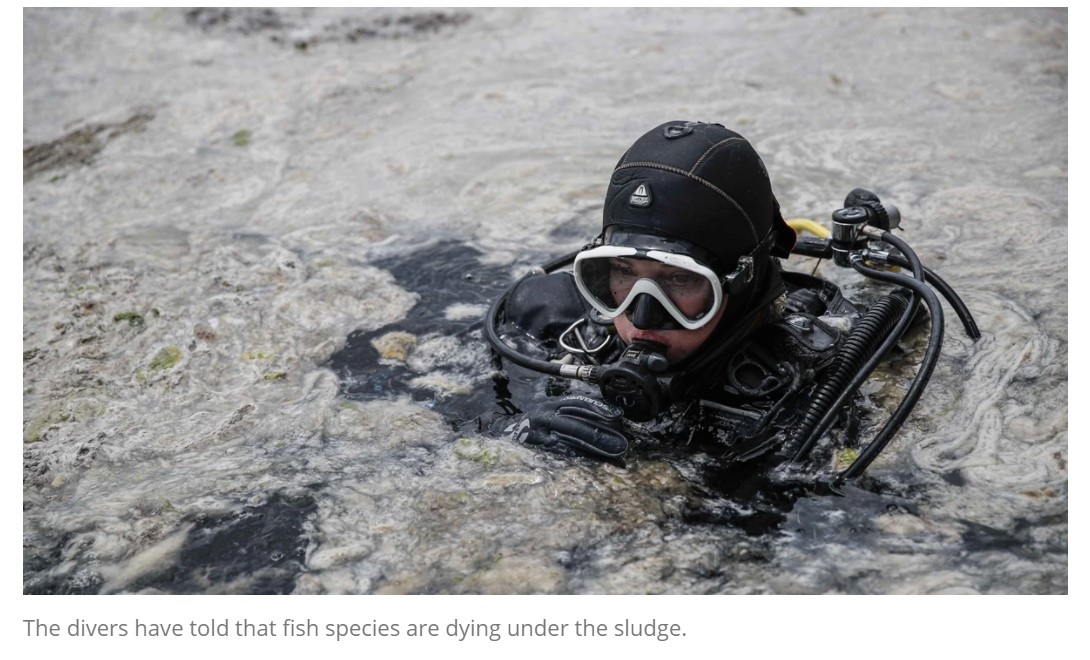 The Sea of Marmara, which separates Istanbul between Europe and Asia, is festered with a new challenge-sea snot. The huge mass of organic matter has taken over the water body, disturbing the aquatic ecosystem and local communities. The crisis has been triggered by global warming and increasing pollutants.

Amid growing concerns over the accumulation of the slimy green sludge, Turkey has vowed to save its shores from new development building up in its waters. Turkish President Recep Tayyip Erdogan has said, “We will save our seas from this mucilage calamity.”

The sludge has also been seen in the adjoining Black Sea and Greece’s Aegean Sea, which are connected by the Sea of Marmara. Now the government has unleashed a massive campaign to get rid of the crisis that threatens Turkey’s marine ecosystem.

The sea is surrounded by a population of nearly 20 million people, serving not only as a crucial maritime transit route, but as a tourism and vacation sport, too.

What is Sea-Snot and how has it formed?

Sea snot is a thick, slimy grey-brown sheet known as marine mucilage that is formed by dead and living organic material. The sludge forms when algae overloaded with nutrients blooms in warm weather due to climate change. It is to be noted that algae are the prime source of maintaining oxygen concentration in water bodies, however, if their growth is overlooked, they could lead to the formation of this mucilage that could block sunlight from entering the deep waters.

Sea-snot was first detected in Turkey in 2007. However, the recent outbreak is the biggest in its history.

While the exact cause of their rampant growth is still being debated, one prime reason is pollution from organic compounds like nitrogen and phosphorous. Meanwhile, the rising water temperatures have also played their part. Baris Salihoglu, head of METU’s Institute of Maritime Sciences told DW, “We know that the water temperature in Marmara has increased by 2 to 2.5 degrees Celsius over the past 20 years, above the global average.”

The sea is surrounded by a population of nearly 20 million people, which has triggered overfishing in the area causing a major loss to the aquatic biodiversity making it vulnerable to such outbreaks. Industrial and agricultural runoff has also been contributing to Marmara’s degradation.

Why the heightened focus?

The Sea of Marmara connects the Black Sea to the Aegean Sea, which is an important trade route for the region. At the moment boats have to negotiate through the thick sludge in the Marmara, however, if it spreads rampantly to the Black Sea it could create a global problem. President Erdogan said, “My fear is, if this expands to the Black Sea, the trouble will be enormous. We need to take this step without delay.”

The Sea of Marmara is also an important source of economic activity in the region, which includes major metropolitan areas like Istanbul, and the growing accumulation of sea snot could jeopardise fisheries industries. Local fishermen have been complaining that the nets are being filled with sludge making them extremely heavy to be lifted and at times visible to the fish.  The widening coverage of the sea snot deluge could also hurt Turkey’s nascent tourist season, upon which the recovery is now dependent.

Meanwhile, the aquatic ecosystem is also on the verge of collapse. There have been reports of fish species being endangered from the sludge as they battle suffocation. Professor Bayram Ozturk of the Turkish Marine Research told BBC that due to the overgrowth of the mucilage, several species are under threat including oysters, mussels, sea stars, adding that “it’s a real catastrophe.”

The Mucilage has spread to nearly 80-100 feet below the surface and if it sinks to the bottom of the seafloor it could be further detrimental to the marine ecosystem in the region. The sea-snot has the capability of poisoning fishes and other marine species that are already on the verge.

The government has rushed a team of 300 members to inspect the potential source of pollution.

The decade’s worst draught compounded the problem, as well as the administration’s neglect of the environmental issues.