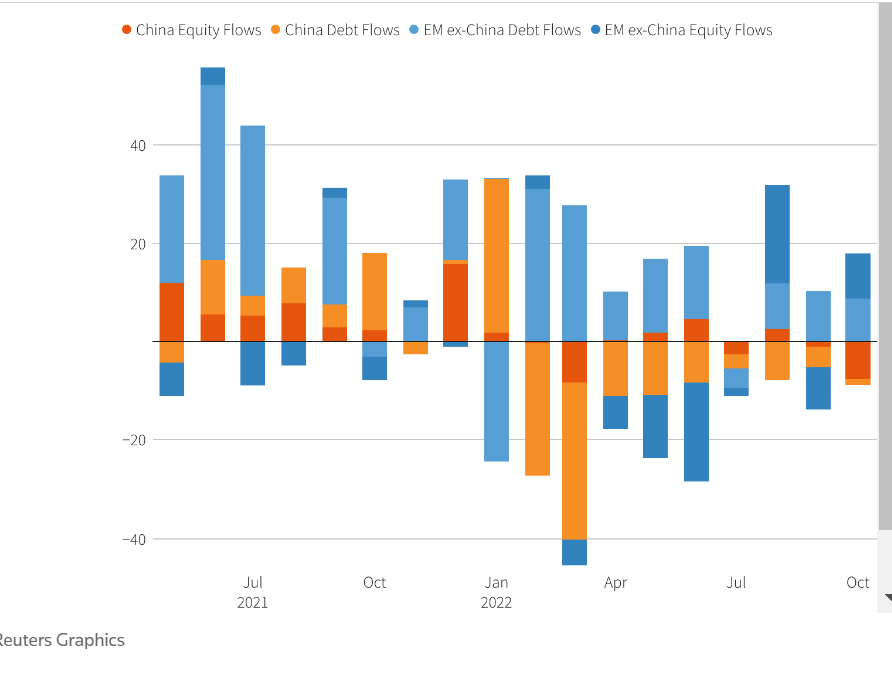 Emerging markets in October posted their second-largest month of portfolio inflows this year, though China suffered another bout of outflows with investors rethinking their exposure to the country, the Institute of International Finance (IIF) said.

Global funds are sold on the twin  ideas of “peak inflation” and “decoupling” of    EM from troubled in Developed Markets, which is once again pushing funds into EM. Can it last?

Chinese bond portfolios have posted outflows every month since Russia invaded Ukraine in February, totaling $105.1 billion over nine months. Chinese stock portfolios lost $7.6 billion in October, the most since March.

Back in the first quarter, the IIF debated whether the shift to outflows from China was a tactical move linked to the Russian invasion or a shift in investor strategy.

“Increasingly, this question is being settled in favor of the latter, with market participants looking at China in a new light,” said IIF economist Jonathan Fortun in a report alongside the flows data.

“This shift reflects geopolitical concerns and anxiety that the government’s zero-COVID policy could weigh on China in the medium term.”

China’s zero-COVID approach, which is slowing the economy and fueling widespread frustration, was deemed “completely correct” by Chinese authorities over the weekend and is not expected to be significantly revised before an annual parliamentary session in March.

Money managers have increasingly launched emerging market or Asia investment products with no exposure to China to meet increasing demand for such strategies from global investors.

However, some asset managers have argued that beaten-down Chinese assets, especially equities, are attractive. Others are just betting on hope.

The October inflows failed to offset outflows suffered by emerging markets earlier in the year. Overall emerging market bonds and stocks flows are at -$6.2 billion for 2022, with China flows alone tearing an $82.8 billion hole year-to-date.

IIF regional data showed an inflow of $5.6 billion to Asia despite China’s significant outflows, while Latin America took in some $2.6 billion and emerging Europe another $2.3 billion. The only region in the red last month was Africa and the Middle East, with $1.3 billion in outflows. 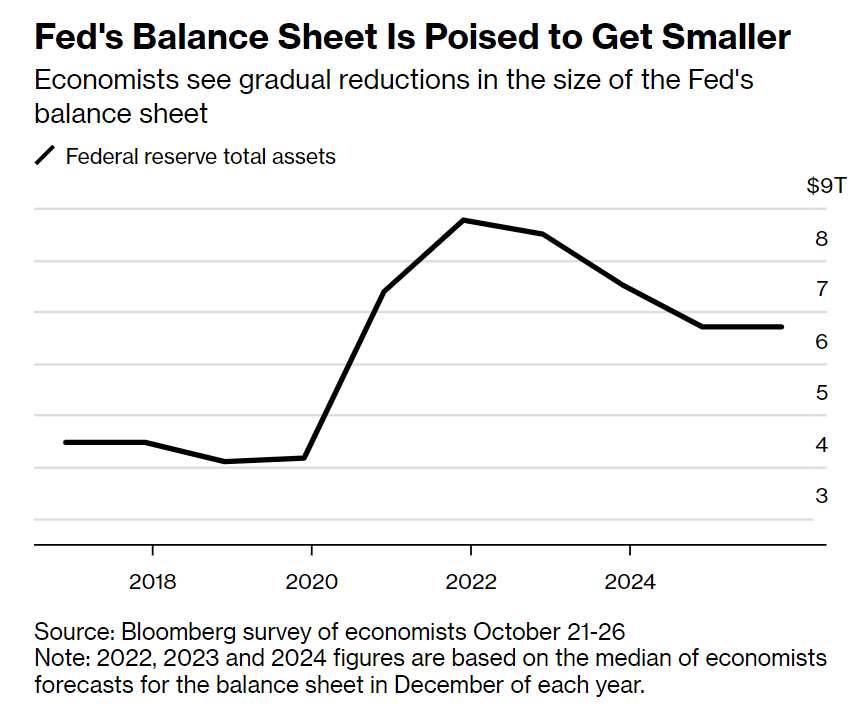 These flows are occurring at a time, when “Already about 60% of low-income countries and about 25% of emerging markets are either in debt distress or at high risk of it. Recent developments in rich countries – especially the US – are making life a lot more challenging”, according the Guardian.

Flows are driven by the perception that “peak inflation” is around the corner, which translates into Fed and ECB slowing down the pace of rate hikes, and potentially reverting to easy money policies in late 2023 or 2024. However,  Kristalina Georgieva, the IMF’s managing director, warned that a fragmentation in global manufacturing supply chains could make it harder to push measured inflation rates back down to the levels seen in recent years before the Covid pandemic.

“We actually think inflation is going to be harder to bring down to the desirable level of around 2%. Why? Because the drivers of deflation are not only supply [and] demand disruption, but also a changing cost structure that comes from the realization that, no more, we make economic decisions only on the basis of cost.

If she is right, Fed-ECB shall tighten beyond current rates implied by futures markets, pulling funds back to US and Euro-zone.