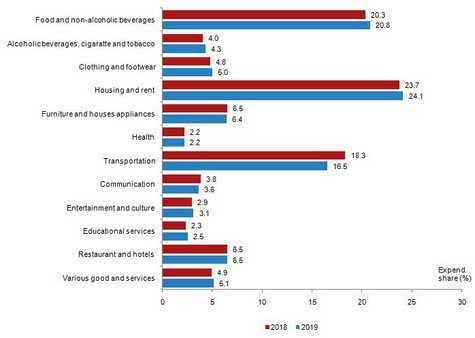 Turkstat’s 2019 survey of household expenditures reveal the picture of an economy slowly sinking from Middle Income to Lower Income nations, as household have little to spare for health, education and entertainment.  The stats reveal large income disparities, as well as explaining one of the man reason why Turkey can’t develop socially:   Income barely cover basic necessities, leaving aide little for the proper education of siblings and personal  enlightenment.  With CPI rising to 12.6%, the situation is not expected to improve in 2020. In fact, the broadest measure of unemployment reached 24.3% in April-May survey, suggesting that even health spending and the cherished habit of sending kids to private schools for better education might be sacrificed.

Housing and rent expenses took up the largest share of household consumption in 2019 with a rate of 24.1 percent, the Turkish Statistical Institute (TurkStat) announced today (July 16), according to an article by BiaNet.

Food and rent take up half the household budget

The share of expenditures on food and non-alcoholic beverages took second place with 20.8 percent and followed by transportation expenditures with 16.5 percent.

The highest increase was in food and non-alcoholic beverages

According to the survey, the share of food and non-alcoholic beverages expenditures increased from 20.3 percent to 20.8 percent with 0.5 percentage points compared to the previous year. This increase is symptomatic of countries where real per capita GDP is declining, as well a manifestation of rampant food inflation.

The share of alcoholic beverages, cigarette and tobacco expenditures increased to 4.3 percent from 4.0 percent. The share of clothing and footwear was 5.0 percent in 2019, increasing from 4.8 percent in 2018.  Regarding alcohol and tobacco, the jump in expenditures is a symptom of outrageous excise taxes, which is sapping purchasing power for other activities, as well as representing a significant transfer of income from household budgets to government coffers. As a result  Turkey has one of the most active home distillery cottage industry in Balkans.

The share of health expenditures and restaurant and hotel expenditures remained unchanged from 2018 to 2019 with 2.2 percent and 6.5 percent respectively.

And signs of further income disparity