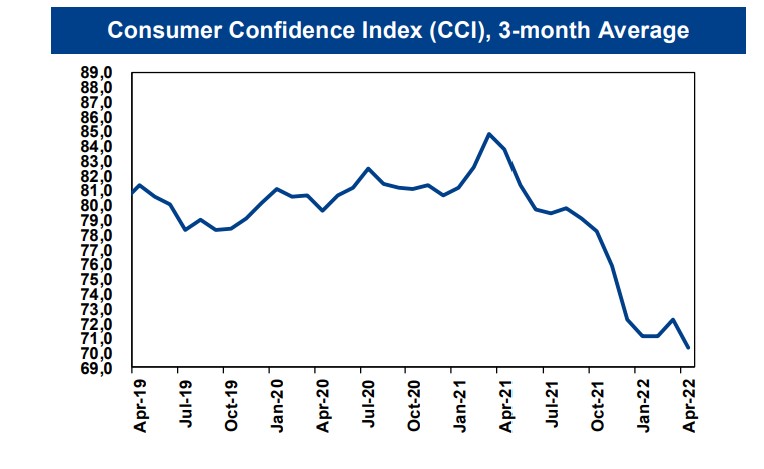 Turkstat (official) Consumer Confidence Index (CCI) decreased by 7.3% to 67.3 in  April (March: 72.5, +1.9% MoM).  There was no consensus  available for the data,  however BloombergHT CCI Index, which is a  leading indicator for the data, had  increased by 17.9% to 54.6 in April.  Both surveys revealed a slight degree of optimism, probably driven by the stable exchange rate about future economic conditions. On the other hand, rising inflation and expectations have a perverse impact on spending behavior. Households intentions to increase spending despite poor financial well-being to avoid higher prices in the future.

The details of the index, as reported by Yatirim Invest economics team are as follows:

In monthly basis, all main sub-indices recorded decreases. Expectations for wage change and  assessment of spending on semi-durables were over the critical value  of 100 which indicates  positive sentiment about future economic conditions.

According to 3-month average  figures, downward trend on financial situation of households sustained as probability of borrowing money for the consumption expenditures increase.  In other words, despite lower disposable incomes, household project higher prices for the future, preferring spending to saving. This trend is accentuated by artificially low loan rates, currently about 20% per annum, which encourages households to borrow to buy homes and durables. In other words, households understand   that it makes sense to borrow  at deeply negative real interest rates, with a view on acquiring real assets, the value of which is likely to increase in the future.

3-month average figures indicate  that saving  and buying of durables  intentions increased as the assessment on consumer prices changes starts to deteriorate.