Turkish inflation accelerated faster than all estimates last month, reducing the likelihood of a summer interest-rate cut sought by the country’s president.

Consumer prices rose an annual 17.5% through June, up from 16.6% the previous month on the back of broad-based gains led by food, according to data released on Monday. The median of 18 forecasts in a Bloomberg survey was for 16.8%. All but four economists predicted an acceleration in price growth, which had snapped seven months of increases in May.

Here are some highlights from the data:

Turkey eased its strict coronavirus lockdown last month after a drop in the number of new cases, boosting consumer confidence. But continued lira weakness and rising global commodity prices mean it’s too early to start a new cycle of monetary easing, even though President Recep Tayyip Erdogan signaled a possible rate cut in July or August.

A rate cut in the summer “is not going to happen, not with this inflation,” said Cristian Maggio, head of portfolio strategy at TD Securities. “September is really the earliest they can now pull the trigger,” he said. “That is assuming that Erdogan doesn’t call Kavcioglu and tells him to cut if he still wants his job.”

Jason Tuvey, a senior emerging-markets economist at Capital Economics, echoed that prediction. “An easing cycle is now more likely to begin towards the end of 2021 when inflation looks set to fall sharply” as the effects of sharp drops in the lira over the past 12 months unwind, he said.

The central bank under Governor Sahap Kavcioglu kept interest rates unchanged for a third meeting in June, but adopted a more hawkish tone. The lira has weakened more than 15% against the dollar since the governor’s abrupt appointment in March, even though he’s pledged to work toward a positive real rate — or borrowing costs adjusted for realized and expected inflation — and to maintain tight policy until the bank’s 5% inflation target is achieved. 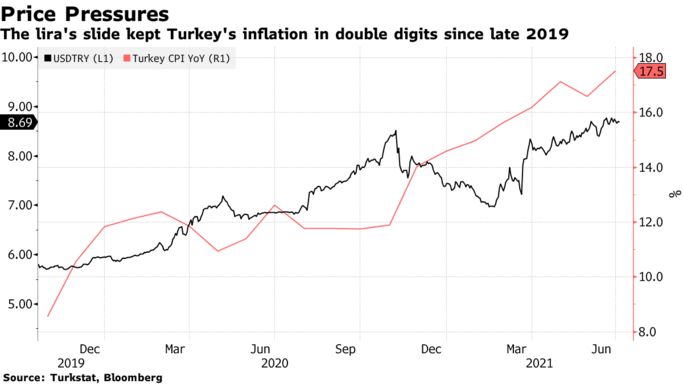 Monday’s data put Turkey’s benchmark rate adjusted for inflation at 1.47%, and also undermine previous guidance by Kavcioglu that the pace of price increases probably peaked in April. Price growth may accelerate further above 18% in July, according to Deutsche Bank AG economists, including Fatih Akcelik, who accurately forecast a sharp increase this month.

An increase in utility prices announced last week will likely create upside pressure on headline inflation in July. Turkey increased the cost of electricity by 15% and natural-gas prices by up to 20% as of July 1.

Annual retail inflation in Istanbul, Turkey’s largest city, accelerated to an annual 16.12% in June from 15.78% in the previous month. Turkey’s central bank will hold its next rate-setting meeting on July 14.