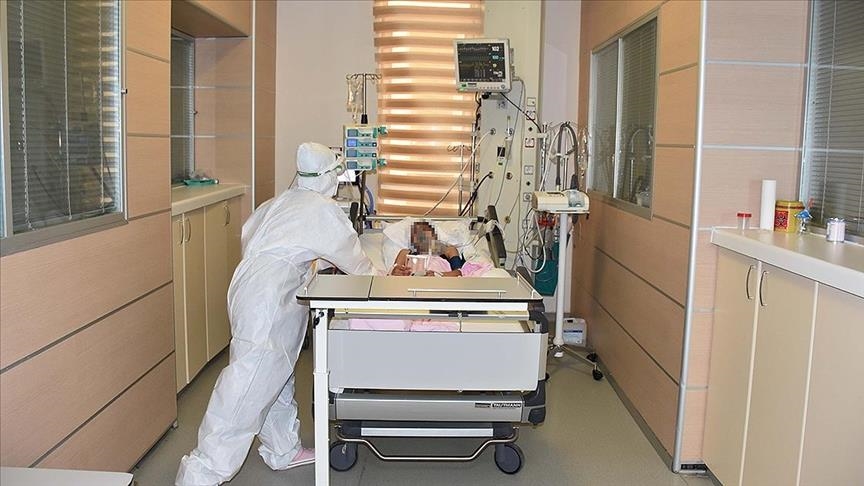 UPDATE:  ON Tuesday, Turkey’s Health Ministry reported 61,028 cases with 2.895 patients and  346 deaths. Currently, 18-20% of tests turn out Covid-positive, which had not changed over the last 15 days, indicating restrictions and vaccination has not slowed down transmission.

Reuters reported that  Turkey is only second  to India in new coronavirus cases with a recent surge raising active infections to a peak equivalent to nearly 1% of working age people, according to a calculation based on health ministry data showed on Tuesday.  Yet, unlike India, President Erdogan shies away from strict lockdowns in fear of damage to the economy and  to preserve budgetary funds.

Deaths from COVID-19 hit a record 341 on Monday despite more than 20 million vaccines having been administered.

About 551,000 Turks have active COVID-19 cases, compared to a working age population of some 57 million, based on a Reuters calculation of official deaths, recoveries and total cases.  Several health experts, using comparative data from Europe and cemetery records, claim that the actual death toll could be three times higher.

The country, with a population of 84 million, ranks fourth globally in new virus cases on a seven-day average, according to Reuters data. In the last two days, only far larger India has topped Turkey’s number of cases.

Istanbul and other parts of the densely populated northwest have emerged as hot spots, and President Tayyip Erdogan last week reversed course to tighten social restrictions for the Islamic fasting month of Ramadan.  Yet, the added restrictions are only marginally helpful, amounting to weekend curfews (widely violated), inter-state travel bans (for private vehicles, flights and bus service still available) and shut-downs of restaurants.

The health minister said on Monday health workers are feeling the burden in Istanbul and provinces Canakkale and Tekirdag, where intensive care units are more than two-thirds full.

Up to 300 people waited outside Ankara City Hospital late into the evening on Monday after people aged 55 years and older became eligible for a shot.

“When I saw the line I thought everyone in Ankara is older than 55,” said Ayse Filiz Balkanli, 56, a retired banker who waited more than an hour.

“We were very worried at first, thinking we may catch the virus, but when we saw the line was moving fast we were relieved.”

Hikmet Dogan, a hotel worker who received his first shot in Istanbul this month, said of the rising numbers: “People are very frustrated. They want to go out and shop.”

New cases hit a peak of more than 63,000 last Friday, and have multiplied five-fold since early March when Erdogan loosened social curbs in what he called a period of “controlled normalisation”.

The U.S.-based Institute for Health Metrics and Evaluation estimates Turkey’s hospitalization rate will peak next week, and its daily death rate around May 5.  That is assuming, Turkey manages its dwindling vaccine stocks.

The vaccine programme began in mid-January and has delivered some 20.3 million doses, including nearly 8 million people having received two shots, government data shows.

It has relied on Sinovac’s CoronaVac shot but this month added jabs by Pfizer and BioNTech.  However, there is a complete lack of transparency as to how much is left in stockpiles or when the next deliveries will arrive. PA Turkey estimates the Ministry may have about 2-2.5 mn doses left.

WATCH:  Canal Istanbul: The greatest of all White Elephants

The opposition is accusing Erdogan of delaying a full nation lockdown, which is advocated by health experts and  refusing to extend cash aid to low income families, because he wishes to preserve Treasury funds for his ambitious Canal Istanbul project were ground laying for auxiliary bridges will commence this summer.