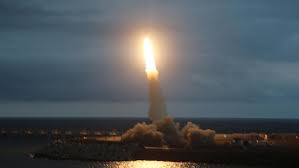 Turkey test-fired a locally made, short-range ballistic missile over the Black Sea on Tuesday, according to two people familiar with the matter.

A mobile platform was used to fire the missile from an airport near the port city of Rize at around 7 a.m. local time, said the people, who asked to remain anonymous because they aren’t authorized to comment. The projectile flew 561 kilometers (350 miles) before falling off the coast of the port of Sinop, the furthest any such weapon developed in the country has traveled, they said.

The secretive missile project dubbed Tayfun, or Typhoon in Turkish, has been under way for several years, the people said without elaborating. The Defense Industry Presidency, which oversees the development of locally made weapons, refused to divulge any information about the project.

Turkey took delivery of an advanced S-400 missile-defense system made by Russia, a top NATO foe, in 2019, two years after Ankara signed an agreement with Moscow to buy the system in the hope that the cooperation could help it develop its own ballistic-missile defense program. The US sanctioned Turkey and barred it from working on and receiving Lockheed Martin Corp.’s F-35 stealth jets in response.