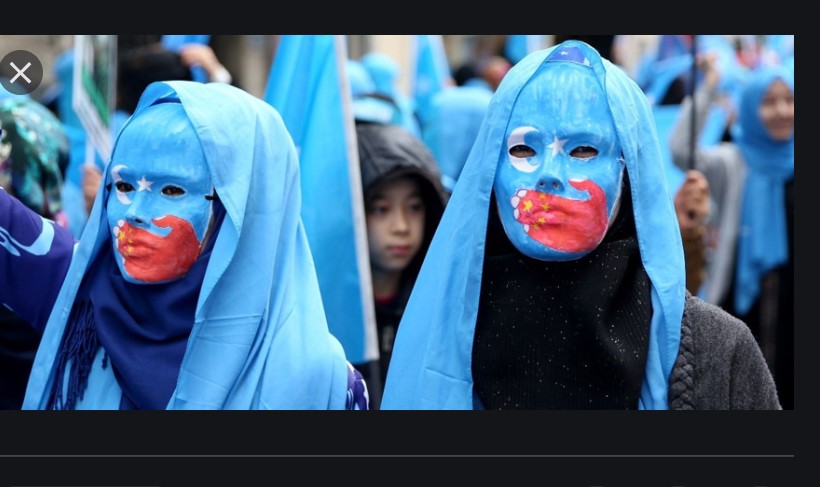 Turkey said it raised the issue of Uighur Muslims during talks with China’s foreign minister in Ankara on Thursday (March 25).

It came as hundreds of Uighurs protested against the treatment of their ethnic kin in China.

Some waved blue-and-white flags of the independence movement of East Turkestan, the name by which the movement refers to Xinjiang.

“We are here because of the freedom of Eastern Turkestan, for asking the Chinese government to close the camps, stop genocide against Uighurs.”

China approved an extradition treaty with Turkey in December.

With the deal awaiting ratification by Ankara’s parliament, activists among some 40,000 Uighurs living in Turkey have stepped up efforts to highlight their plight, holding regular protests in Ankara and Istanbul.

Turkey’s Foreign Minister Mevlut Cavusoglu, who has denied that the extradition accord would lead to Uighurs being sent back to China, said after meeting Wang he had conveyed “our sensitivity and thoughts on Uighur Turks”.

He added that Ankara and Beijing would enhance cooperation against the COVID-19 pandemic and on vaccines.

Uighurs’ worries have been fueled by Ankara’s dependence on China for COVID-19 vaccines, having received 15 million doses from Sinovac Biotech and ordered tens of millions more.

Opposition legislators in Turkey are accusing Ankara’s leaders of secretly selling out Uighurs to China in exchange for coronavirus vaccines. Tens of millions of vials of promised Chinese vaccines have not yet been delivered. Meanwhile, in recent months, Turkish police have raided and detained around 50 Uighurs in deportation centers, lawyers say — a sharp uptick from last year.

As the promised delivery of 50 mn Chinese vaccines are delayed without reason, some experts are suggesting that Beijing is pressuring the Erdogan administration to have the Uighur Extradition Treaty to be ratified in the Grand Assembly. This proposal is fraught with difficulties for Erdogan, as his ally Mr Bahceli of MHP is an avid pan-Turkist. Ratification by AKP-MHP votes could be used by the opposition to question the alliance’s nationalist credentials.

There is also an international angle which could cause harm to Erdogan’s pro-China policies.  More countries are passing legislation recognizing Uighur genocide and/or condemning China for ethnic cleansing.  It is highly awkward for Erdogan to stand apar from this trend without jeopardizing his standing as a leader of Sunni Moslem and Turkic world.

One thing is certain. Whether Chine delivers the promised vaccines or not, Sino-Turkey economic relations will not advance too far as long as Uighurs divide the two nations.