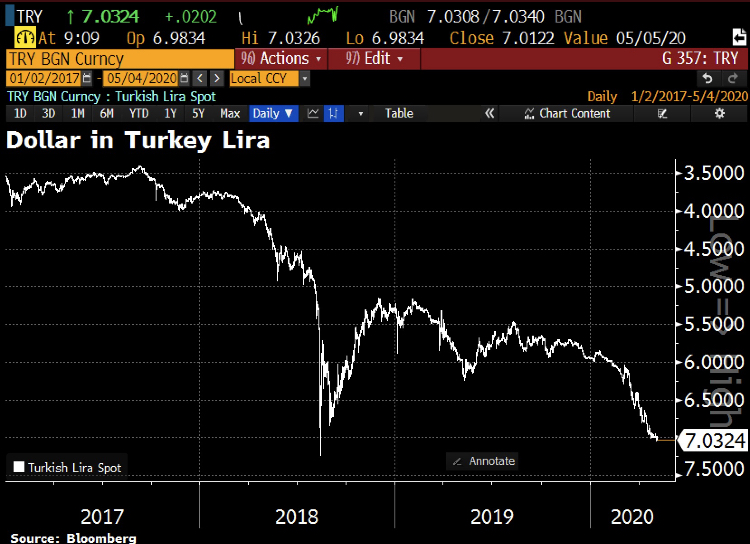 Given the central bank’s recent revision to its inflation expectation from 8.2% to 7.4% along with its second Inflation report of the year that carves the path for even further rate cuts, Turkish lira weakened on the inflation data extending losses beyond the 7.00 against the USD.

The down revision in the central bank’s inflation expectation for YE2020 was based on weaker domestic demand amidst the corona virus, the oil shock and tame food price inflation (revised down to 9.5% from 11%).

Looking at the inflation details below, the food price inflation is far from tame.  The crash in the price of oil has helped yet, the 15% TL deprecation year-to-date against the USD remains as a force to drive prices up.  Despite the sticky core inflation at 11.3%, the expectation that end of year CPI inflation would ease to 7.4% means that the central bank of Turkey will keep on slashing its policy rate by another 150-200 basis points rapidly in the coming months from the current 8.75%. The sharp contraction in domestic demand will ease the pace of inflation down to circa 8.5%, thus negative real rates will persist.  Combined with Turkey’s rapid depletion in its fx reserves on the central bank’s quest to guard for Lira, TRY is set to weaken beyond the so-called “psychological threshold” of 7.00 against the USD down the year.

Beyond 2020, the expected mild correction in the price of oil, revival in domestic demand as the corona-crisis erodes and the new round of TL weakness will work as factors that will pull up Turkey’s CPI inflation rapidly back into single-digit territory.  As the President wants Turkey’s growth at and above 5%, it would be interesting to see whether the central bank of Turkey would be able to pull p its policy rate in an effort to cap a rising inflation in the country.

Along the same line, miscellaneous goods and services with 4.66%, clothing and footwear with 4.08% and furnishing, household equipment and routine house maintenance price increase with 1.09% also stand out as the drivers of April inflation.