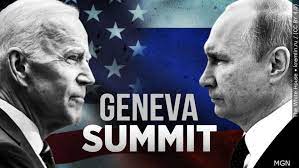 Hard to see this as a game changing summit.
Both have a strong interest to come out of this – in their separate press conferences post the event, appearing hawkish, saying they let the other side have both barrels and vented their frustrations. But they will say it’s good to talk, they both laid out their red lines making misunderstandings and conflict less likely in the future, and the fact the summit was held will be hailed as a success, as will the likely return of Ambassadors on both sides.
In terms of red lines, and/or rules of engagement, I don’t think anyone expects the two sides to agree to Queensberry rules, but there is a desire to move on from Fight Club.
Russia’s red lines are now clear – no NATO membership green light for Ukraine, no Western intervention or meddling in Belarus or Russian domestic politics.
Potential areas of cooperation: arms control, Afghanistan, Iran, Syria, release of nationals in jail in each country.
Red lines for Biden – Russian meddling in Western liberal market democracies (might add in here Russia stirring things in Turkey, which is NATO’s backyard but Putin might see it as on par with Ukraine), cyberattacks, Russian military aggression against Ukraine.
That said, it’s going to be harder for Biden to sell this as a win back home given that he gave Putin’s raft of concessions going into this summit and is unlikely to get anything very specific in terms of a win from Putin. And let’s not forget that the bipartisan view in Congress is overwhelmingly hawkish on Russia with Marco Rubio threatening a new Russian sanctions bill only this week.
Russian assets, or the rouble at least, has performed well in the period since the Summit was announced, albeit oil and commodity prices have also been moving higher, but the market has priced lower geopolitical risk. It will be interesting to see if they sustain the gains post the Summit, given that the Summit itself is unlikely to bring clear discernible improvements in the relationship. Only time will tell if their summit actually brings an improvement in relations and toned down geopolitical risks.
In many respects the ball is in Putin’s court. Biden handed a summit win to Putin already by agreeing to a summit in the first place. Merely turning up is a win for Putin as it confers on him great power status, a peer to the US. That’s what he wants. But does Putin want a better relationship? Can he help himself in his offensive action against Western liberal market democracy? Does he see concessions from Biden as weakness? And that the door of Western liberal market democracy is ajar, some would say barely hanging on its hinges, and he might decide to push in an kick it in?
Scroll Up