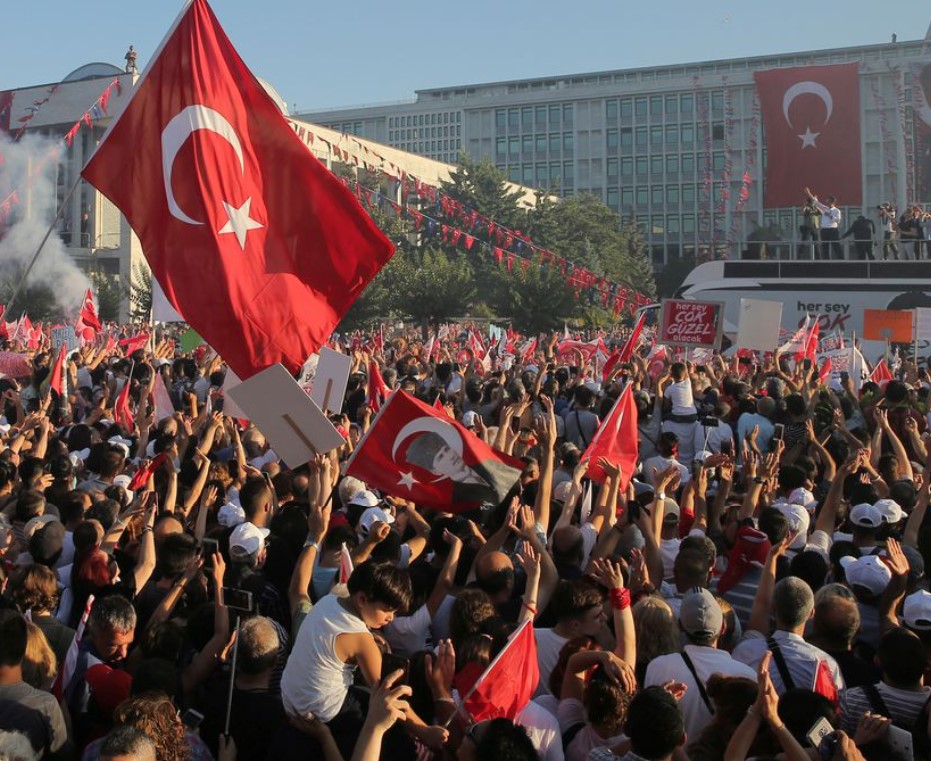 Six Turkish opposition parties are stepping up collaboration in their bid to unseat Tayyip Erdogan and his AK Party at elections due by 2023, raising pressure on the president as opinion polls point to dwindling support for his ruling alliance.  Erdogan recommended the opposition to step back from its inspiration to run the country, adding “it will best for you”, which is interpreted as  veiled threat to use violence against the opposition.

Broadening the coordination which helped them deal a blow to Erdogan at 2019 local elections, the parties held a third meeting on Tuesday and plan weekly meetings to agree shared principles by year-end, those involved in the talks said.

“The opposition in Turkey is trying something that has never been tried before: getting united to confront the government,” political commentator Murat Yetkin said.

Support for Erdogan’s government is ebbing amid criticism of its handling of economic woes such as high inflation and unemployment, the COVID-19 pandemic and forest fires and floods.

Opinion polls show the AK Party on around 31-33%, down from 42.6% in the 2018 parliamentary election, and its nationalist MHP ally on 8-9%, down from 11.1%, levels which would lead to Erdogan losing control of parliament at the next election.

The opposition talks aim to identify shared principles, rather than agreeing a presidential candidate, with the goal of ditching the presidential system of government introduced in 2018 and returning to a parliamentary system, participants said.

IYI Party deputy chairman Bahadir Erdem said they agreed to focus on issues such as independence of the judiciary, media and academia, and laws concerning political parties and elections, with the aim of boosting the separation of powers and democracy.

“These six parties coming together is giving people hope. Instead of divisiveness, there is togetherness, uniting on common ground,” Erdem told Reuters, contrasting it with what he said was the polarization under two decades of AKP rule.

CHP deputy chairman Muharrem Erkek, who also attended the talks, said Turkey was being “dragged to the edge of a precipice” by the presidential system, which puts far greater powers in the hands of the head of state.

“Citizens’ problems are worsening under this one-man system… A strengthened parliamentary system will inspire confidence,” he said.

An alliance of the right-wing IYI Party and the center-left CHP led to Erdogan’s AKP losing control of Istanbul and Ankara municipalities in 2019, shattering his image of invincibility.

Since then, the government has faced growing economic and political challenges, and its handling of them has triggered rare expressions of concern in pro-Erdogan media.

Sabah newspaper columnist Dilek Gungor questioned the government’s success in communicating its achievements, such as major infrastructure projects over the last 20 years.

“Unfortunately, the government cannot even motivate its own base despite all these services and huge projects,” she wrote.

Main opposition party CHP broke another taboo in Turkey during the week, by sending a delegation to pro-Kurdish Rights HDP.  While HDP formally joining the opposition alliance is a remote possibility, CHP is clearly not afraid of being identified with the causes represented by HDP.

President Erdogan presumably threatened to deploy violence to stop the rise of the opposition in stating it would be best for you not to inspire to govern the country”.    The imprisoned leader of JHDP, Mr Selahaddin Demirtas warned the presidency that  he shall hold it responsible for any harm caused to his spouse.  CHP leader  Kemal Kilicdaroglu told the press in Mersin meeting that he is mindful of political assassinations by proxies of Erdogan.  Political commentator Murat Yetkin opines that Erdogan’s threat ought to be taken seriously.

The two opposition leaders targeted by Erdogan, Mrs Aksener and Mr Kilicdaroglu ignored the veiled threats, questioning the mental health of Erdogan and his capacity to perceive the problems of the common people.