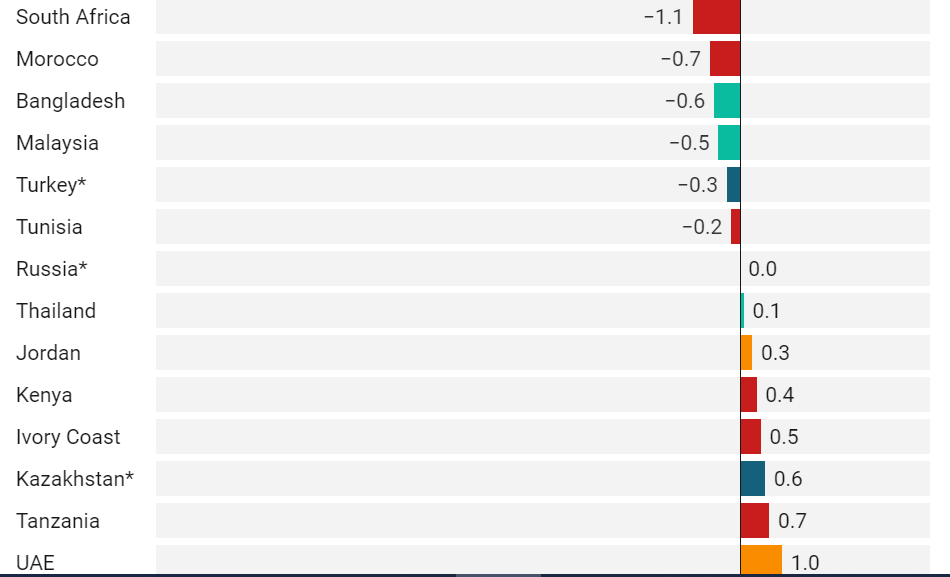 Emerging markets with higher real interest rates should be better prepared in case inflation persists or the US starts tapering (and US yields go up).

In our screen, Egypt and Ghana in Africa, China, Indonesia, Taiwan, Vietnam in Asia, alongside Bahrain and UAE in the Middle East look relatively better in EM.

Weak US jobs but still better to be prepared in EM

US new jobs data (3 September) was much lower than expected, 235k vs 733k Bloomberg consensus forecast. This may delay Taper of quantitative easing and the start of US rate hikes.

Also, Turkey inflation data (3 September) was worse than expected, 19.25% yoy versus 18.75% Bloomberg consensus forecast, and shows how food (up 29% yoy) and fuel (up 21%) can hurt (even more so than President Erdogan’s heterodoxy on easy credit at a time of high inflation, given that core inflation decelerated to 16.8% from 17.2%).

From a long-term growth and currency risk perspective, emerging markets are generally better served by being ahead of the inflation curve, regardless of the outlook for US yields. Whether they have the domestic political confidence, or authoritarian tools, to sacrifice growth for price and currency stability – consider the contrast of Egypt versus Turkey, or China versus Brazil – is another matter.

It is clear though that no EM has the exceptional luxury of the US, namely the ability to pursue very expansionist fiscal and monetary policy with little concern – at least in the short term – on its currency (in a world that continues to regard the US Dollar as the institutionally most secure in times of trouble).

One way of measuring central bank preparedness should global inflationary pressures persist or US rates increase much quicker than expected (undermining the global “search for yield”) is the real interest rate, defined as policy rate minus inflation. Real interest rates diverge substantially across EM.

The lower, or more negative, the real interest rate, the further “behind the curve” that country is in combatting existing inflation and the less attractive a “carry trade” on the currency it offers foreign investors.

Policy rate hikes, should global conditions deteriorate (persistent inflation and higher US yields), may end up having to be significantly greater, and more damaging to growth, than in countries that start with higher, or more positive, real interest rates.

Examples of the lowest real interest rates (below minus 1%), ie the least prepared, most vulnerable countries, are the following.

Examples of the highest real interest rates (above positive 1%), ie the most prepared, least vulnerable countries, are the following.

Some of those countries that have started hiking rates this year still have significantly negatively real interest rates, eg South Korea and Sri Lanka in Asia, Brazil, Chile, Mexico, Peru in LatAm, Iceland and Georgia in Europe.