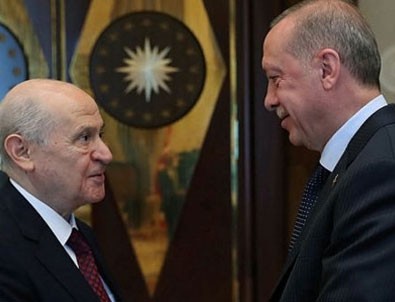 The new scenario spoken in the political backdrop in Ankara is based on the separate participation of the ruling Justice and Development Party (AKP) and its election ally Nationalist Movement Party (MHP) in the upcoming parliamentary elections. According to that scenario, the MHP will not nominate its candidate in the presidential election and will continue supporting the AKP candidate, President Tayyip Erdoğan. Political sources informing YetkinReport stated that this is one of the factors behind the statements of Erdoğan and MHP leader Devlet Bahçeli that they agreed to lower the election threshold from 10 percent to 7 percent.

For MHP, this scenario means proving its presence in the parliament in the next term. Bahçeli denied the claims that the idea of lowering the threshold to 7 percent was because he was not sure that his party will get 10 percent of the votes. But the 7% threshold will make the MHP feel more comfortable anyhow. That will also relieve other parties around the 10 percent threshold, such as the Kurdish-problem-focused Peoples’ Democratic Party (HDP) and center-right Good Party (IYI).

The scenario of entering the parliamentary elections separate from the MHP is also beneficial for the AKP. It is possible to collect the reasons under three headings. To disband the CHP-IYI (Nation) Alliance via IYI to attract the votes of the Kurdish voters and to attract the voters of the parties that cannot stay close to 7 percent for the time being.

On the AKP front, there is an opinion that not entering the parliamentary elections with the MHP can open new channels with the IYI. AKP lieutenants think that could cause the IYI Party to participate in the parliamentary elections separate from the CHP to prove itself. Akşener’s support for the mayors of Istanbul and Ankara, Ekrem İmamoğlu and Mansur Yavaş to not run for President is also a factor. However, the possibility that the deterioration of the alliance may change this picture.

In the 2019 local elections in Istanbul, the AKP saw that the electoral alliance with the MHP backfired on Kurdish voters and even AKP supporter Kurdish voters. Until AKP’s Alliance with the MHP, more than half of the Kurdish voters have used to vote for the AKP, not the HDP. These were religious and conservative Kurdish voters. Backstage information is that the MHP also sees this fact and is convinced that the AKP if entered the elections separately for the sake of their People Alliance, can get votes from the Kurdish voters again. CHP’s reluctance to come side by side with the HDP is also an advantage for the AKP. HDP co-chair Mithat Sancar mentions the need for a “founding parliament”, in which all parties should take place in the work for a new constitution, implying that their doors are not closed to signs from the AKP. An important question here is whether the Kurdish voters will trust the AKP, which will continue to act with the MHP in the presidential election, just because it does not enter the parliamentary elections with the MHP. It is an important issue.

Some parties do not approach 7 percent in the current opinion polls. Those include Ali Babacan’s Deva, Ahmet Davutoğlu’s Gelecek, Temel Karamollaoğlu’s Saadet, and Mustafa destici’s Greator Unity Party (BBP); all on the right wing. If these parties enter the elections with the alliance of the People, or the Nation, they have the chance to send a small number of deputies to the Turkish Parliament. However, if they enter on their own, their chances are slim. The AKP circles calculate that entering the elections separate from the MHP may direct the voter base of these parties to the AKP again.
Does the account at home match the market? It is a separate issue.

Are those early election signs?