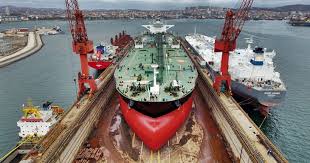 Transport and Infrastructure Minister Adil Karaismailoğlu heralded Turkey’s rise in maritime  shipping to top ranks, saying:  “Our country integrates into the global sea transport netwrok rapidly. Our goal is to become a transit port country. We will not stop until we substantially increase the  2.4 percent sahre of GDP in the maritime shipping .”

Minister of Transport and Infrastructure Adil Karaismailoğlu made a statement to the AA correspondents to commenmorate World Seafarers Day. He said Turkey’s share in “the blue economy” will increase further. Karaismailoğlu drew attention to the progress recorded by Turkey in the last 18 years in the maritime field. He stated that the Turkish maritime trade fleet has improved vastly by diversifying in terms of ship type, tonnage and size.

Minister Karaismailoğlu said that the sector rose two ranks in the world ranking with the support of the state and targets to posses the largest maritime shipmnet volume in the region. Karaismailoğlu added that at the beginning of 2003, the Turkish-flag carrying trade fleet ranked 17th with 29.9 million DWT.

Karaismailoğlu stated that the capacity of the Turkish maritime trade fleet has grown 87 percent faster  than the general world maritime fleet in the past 18 years. “In luxury yachting, Turkey takes the 3rd place in the world. In shipmaking industry across the world, Turkey has 8.3 per cent share in the overall volume in 2019 with 1.1 million GT. This is the first in Europe, and ranks third in the world.” he spoke.

Karaismailoğlu gave the following information while addressing the place of shipping in foreign trade: “The numerical value of maritime routes in our foreign trade was 57 billion  dollars in 2003, today we reached 222.1 billion dollars with an increase of 290 percent. Our foreign trade transports increased by 137 percent in 2019, reaching 353 million tons. In 2003 while there were 9 international regular Ro-Ro lines in Turkey, this figure increased to 25 at the end of 2019. “

Karaismailoğlu said that around 100-150 million dollars worth  of tugboats were exported annually. He pointed out that tug exports constitute about 15-20 percent of annual ship and yacht industry exports. Also  Turkey’s seafarer training is an important resource for the world, he said. Minister Karaismailoğlu said there are 103 educational institutions that provide education  in international standards and are accredited by the Ministry. He reported that there are 133 thousand 721 active seamen ready to serve on ships in the world’s seas.

Karaismailoğlu pointed out that the number of shipyards increased from 37 in 2003 to 83. He said that the annual production capacity of the shipyards reached 4.54 million DWT from 550 thousand DWT in the same period with an increase of 724 percent.

Touching on the developments regarding Turkish ports, Karaismailoğlu stated that the export of ships and water vehicles increased approximately 2 times in 2003-2019 period, from 450 million dollars to 1.2 billion dollars. Stating that 200 thousand people are employed in the maritime industry in Turkey, Karaismailoğlu said:

“We are increasing our formal and non-formal education capacity in order to increase sea awareness in our country, which is covered with seas on three sides. Approximately 2 thousand students receive training in this field. SCT taken over the fuel used by our cargo and passenger ships, commercial yachts, service and fishing vessels working  since 16 years. Since then, 8 billion TL SCT support has been provided to our maritime. “