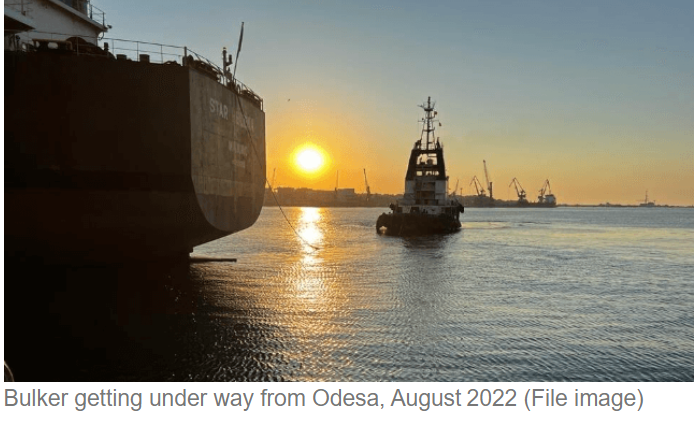 After suspending its participation in a grain deal brokered by Turkey and the U.N., Moscow said it wouldn’t guarantee security for any cargo vessels crossing the Black Sea.

Although Russia has suspended its participation in a deal that allowed Ukraine to export its grain by ship, 12 cargo vessels carrying grain set sail from the country’s Black Sea ports on Monday after the deal’s brokers, Turkey and the United Nations, notified Moscow.

The departures of the ships, which had been authorized to sail before the deal was suspended, appeared to pass without incident. Moscow’s announcement on Saturday has meant a halt to its participation in ship inspections in the port of Istanbul — and to guaranteeing security for any cargo vessels crossing the Black Sea, where its navy dominates.

Russia’s Defense Ministry stressed that point in a statement on Monday evening, saying that vessel traffic through the safety corridor established for the grain initiative was “unacceptable.” It accused Ukraine’s military, without offering evidence, of using the corridor for “conducting operations” against Russia and said “there can be no question of ensuring safety” until Ukraine made additional pledges not to use it for “military purposes.”

Then President Vladimir V. Putin, speaking at a news conference late Monday after a meeting with the leaders of Azerbaijan and Armenia in Sochi, Russia, reiterated that Russia was pausing its participation in the agreement, insisting that the onus was on Ukraine to guarantee the safety of the grain corridor.

Underscoring the potential risks, the Ukrainian military’s southern command said on Monday that Russian shelling of the port in Ochakiv, which sits on the Black Sea, hit two civilian tugboats that were involved in transporting a grain barge. Two people were killed and another crew member was injured, it said. The incident and vessels involved did not appear to be directly related to the grain deal.

The Russian Defense Ministry’s statement — coupled with remarks from Russia’s permanent representative to the United Nations, Vasily Nebenzya, reported by Interfax that Moscow “cannot allow unimpeded passage of vessels without our inspection” — signaled that the movement on Monday of some vessels carrying grain might have been a one-off.