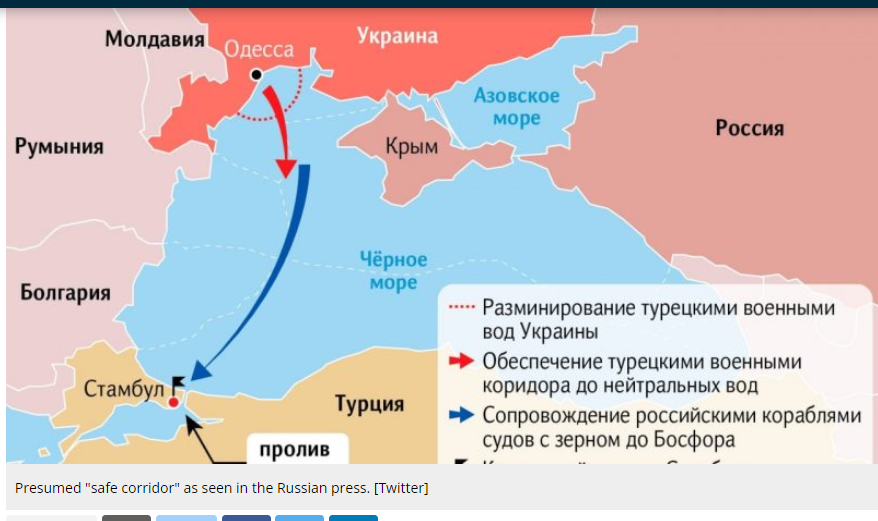 Russia on Saturday suspended participation in a U.N.-brokered Black Sea grain deal after what it said was a major Ukrainian drone attack on its fleet in Crimea, dealing a blow to attempts to ease the global food crisis, reported Reuters minutes ago.

Russia’s defence ministry said Ukraine attacked the Black Sea Fleet near Sevastopol on the annexed Crimean peninsular with 16 drones in the early hours of Saturday, and that British navy “specialists” had helped coordinate the “terrorist” attack.

Ukraine Counter-Attack Will Have Daunting Consequences for Turkey

Russia said it had repelled the attack, with just minor damage to a minesweeper, but that the ships targeted were involved in ensuring the grain corridor out of Ukraine’s Black Sea ports.

“The Russian side suspends participation in the implementation of agreements on the export of agricultural products from Ukrainian ports,” the defence ministry said in a statement.

Russia said the step, which will cut Ukrainian grain exports from its crucial Black Sea ports, was taken due to the drone attack and the participation of British specialists.

Britain on Saturday said Russia’s claims, including that British navy personnel blew up the Nord Stream pipelines last month, were false and aimed at distracting attention from Russian military failures in Ukraine.

“I call on all states to demand Russia to stop its hunger games and recommit to its obligations,” Kuleba said.

The United Nations-brokered grain deal is crucial for food markets: it allows the export of grain from Ukraine, one of the world’s largest grain exporters, that the Russian invasion had halted.

Since Russia and Ukraine signed the U.N.-backed Black Sea Grain Initiative in Turkey on July 22, more than 9 million tonnes of corn, wheat, sunflower products, barley, rapeseed and soya have been exported from Ukraine.

But ahead of the Nov. 19 expiry of the grain deal, which allows Ukrainian Black Sea grain exports, Russia has repeatedly said that there are serious problems with it. Western officials says any Ukrainian exports help ease the food crisis.

The United Nations is in contact with Russian authorities about the situation, a U.N. spokesman said.

United Nations aid chief Martin Griffiths said only on Wednesday that he was “relatively optimistic” that the deal would be extended beyond mid-November.

“Although the prices in the Western markets were reduced, Russia did not gain anything from this agreement,” said Turan Oguz, a Turkish defence analyst. “I think the main reason for Russia’s withdrawal is Western indifference towards Russia.”

Just 24 hours before Russia suspended participation in the deal, a spokesman for U.N. Secretary-General Antonio Guterres had appealed to the parties to renew the pact.

“We underline the urgency of doing so to contribute to food security across the world, and to cushion the suffering that this global cost-of-living crisis is inflicting on billions of people,” U.N. spokesperson Stephane Dujarric said.

Dujarric said that “governments, shipping companies, grain and fertilizer traders and farmers all over the world” were looking for clarity on the future of the deal.

Russia’s foreign ministry said that following the attacks on Russia’s fleet, “the Russian side cannot guarantee the safety of civilian dry cargo ships participating in the “Black Sea Initiative”, and suspends its implementation from today for an indefinite period.

Russian Agriculture Minister Dmitry Patrushev said earlier on Saturday that Russia was ready to supply up to 500,000 tonnes of grain to poor countries in the next four months for free, with assistance from Turkey, and supplant supplies of Ukrainian grains.

“Taking into account this year’s harvest, the Russian Federation is fully prepared to replace Ukrainian grain and deliver supplies at affordable prices to all interested countries,” he said.