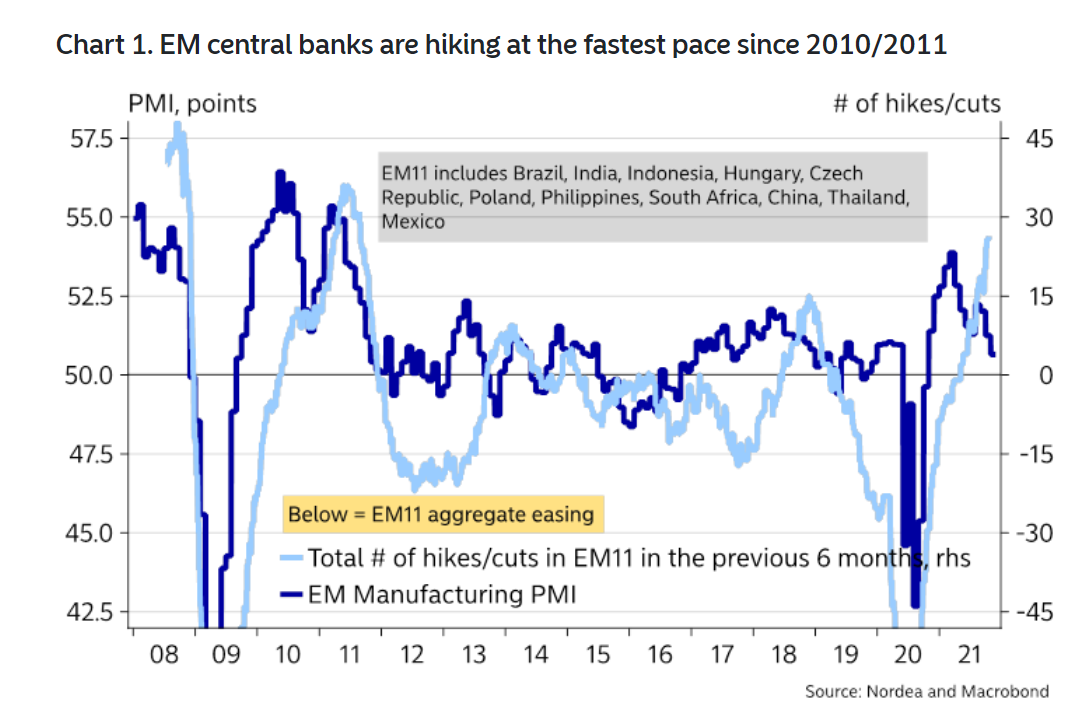 As the world economy swings into monetary prudence,   Erdogan’s propensity to cut rates is certain to land the Turkish economy in more trouble. “Hike expectations have increased everywhere except in Turkey where the strategy is the exact opposite. EM hikes are already on the table across the board, but how soon will DM central banks follow? Inflation pressures are piling up!”, writes Nordea Research.

Chile, Peru, Poland, Romania, the Czech Republic, Mexico and the list goes on. A lot of EM central banks have started to hike interest rates due to the surging global inflation pressure and more is coming as pricing of hikes is getting increasingly frontloaded, which makes sense to us. We would probably argue that hikes can be frontloaded even further as inflation is bound to rise even further during Q4 2021 and Q1 2022.

Front-end pricing of central banks is also going bananas in DM markets at the moment as everyone is throwing in the towel on the “transitory” inflation story as we have warned was bound to happen sooner or later since early this year. The repricing of the USD and GBP front-end is among the quickest in history, as 2yr rates in USD have moved faster than during the 2013 taper tantrum, while the GBP repricing is the fastest since the great financial crisis.

A Bank of England hike is almost a done deal already in November (in market pricing), and the new Chief Economist of the BoE has even called the meeting LIVE. It seems as if they are mostly happy with the repricing, which goes to show that DM central banks can suddenly move fast, if they throw in the towel on the transitory inflation narrative.

To us, this smells of substantial curve flattening!

There is Erdogan and then there is the rest. Hiking expectations have basically increased across the globe compared to three months ago, and EM expectations are now extremely hawkish. On the contrary, Turkey is following the Erdoganish interest rate policy according to which rates need to come down when inflation goes up. The TRY is not happy about it, but maybe local real estate developers are?