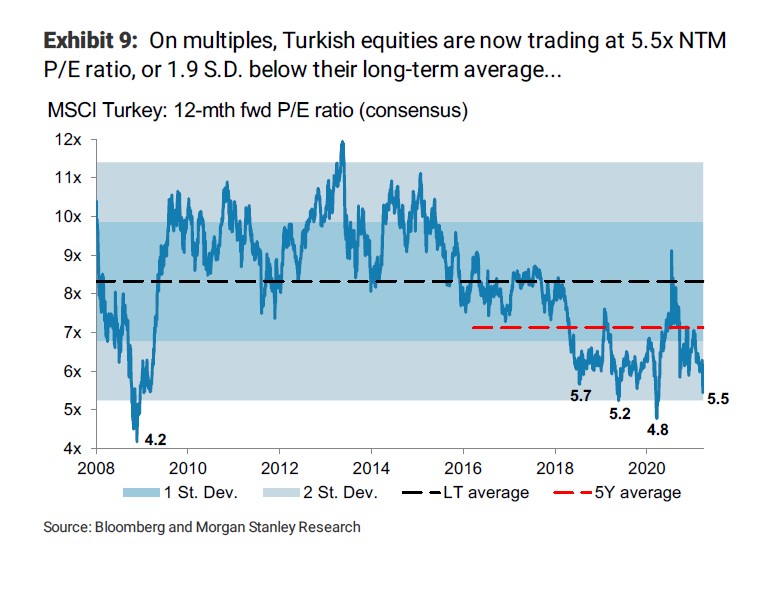 MSCI Turkey is down 20% in USD since last Friday, with TRY depreciation explaining 8 p.p. of it. With uncertainty over the direction of policy and with our FX team seeing risks tilted towards an even weaker currency & higher inflation, we favour exporters in Turkey. We highlight steel producer Erdemir.

Following the recent change in CBT governor, our economics team sees the initial macro impact as most likely to be observed through weaker FX and higher inflation. Further, limited reserves and high levels of short-term external debt, as well as the risks of further dollarisation, and of monetary policy reversal and lower rates, support their view of risks of an even weaker currency

…which supports our preference for exporters

After the index decline on Monday, one of the most extreme daily declines in the past 23 years,  performance has been practically stable at the index level, with MSCI Turkey down 1% in local currency. However, we note a significant difference at the sector level, with exporters and defensive stocks recovering from Monday’s sell-off, while domestic cyclicals, in particular the banks, remained weak. We note that exporters and defensive stocks combined represent 63% of MSCI Turkey weight, while financials are 25% of the index.

Despite low valuations, uncertainties over the direction of policy keep us equalweight

Valuations of Turkish equities have now reverted to September/October 2020 lows. In fact, we find MSCI Turkey trading at 5.5x NTM P/E ratio, or 1.9 S.D. below its long-term historical mean. Meanwhile, at a P/BV level, MSCI Turkey is now at 0.8x, or 1.7 S.D. below its historical average. Meanwhile, on technicals, Turkish equities still do not screen oversold. Despite low valuations, in the near term the change of governor has increased uncertainty – in particular over whether the recent CBT regime shift will be continued or reversed -supporting our equal-weight rating.

The correction across all sectors creates some good entry points

We highlight steel producer Erdemir, Overweight rated. We present in this note  a stock screen of Turkish stocks classified by FX hedge, cyclicals, defensives and financials. We note the recent underperformance of some FX Hedge names, in particular, Erdemir, top pick of MS EEMEA Metals & Mining analyst, Dan Shaw, amongst the steel names. The stock trades at a discount to peers, and offers one of the highest DYs in the materials space, whilst offering exposure to rapidly improving steel margins in the Black Sea.