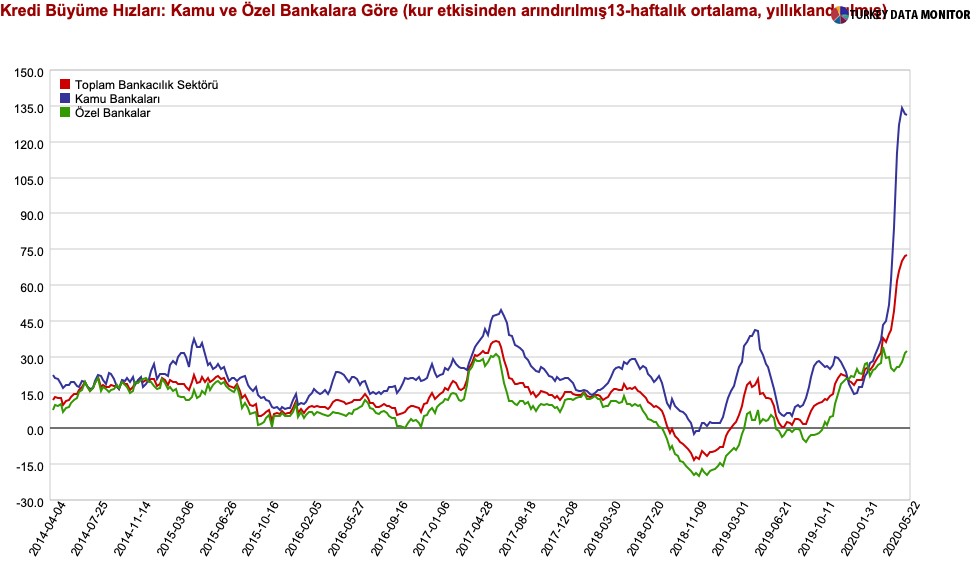 Total loans of the Turkish banking system rose by 18%, YTD, with credit momentum (Central Bank’s measure:  13-week moving average change in total loans) soaring to an eye-opening  72% per annuum. Thanks to the easing of macro-prudential rules by banking regulator BRSA, bad loans remained at 4.8% of the total portfolio.  Despite this abnormal expansion of credit at a time when IMF expects Turkish GDP to decline by 5% in 2020, only to partially recover its losses in 2021, the government wants faster loan growth. Four state banks unveiled a subsidized loan scheme on Friday for those who wish to buy houses, domestic cars or to vacation. BRSA “fine tuned” its infamous Asset Ratio over the weekend, to force private banks to make even more loans, damn the credit risk.  This cavalier attitude towards the loan boom  didn’t escape the attention of rating agencies, with Moody’s issuing a damming report about the future of the industry.

Over the weekend BRSA has announced revisions to the Active Ratio (AR) calculation for banks. Accordingly, two significant changes have been made. Firstly, loans with maturity of shorter than 3-months are to be excluded from calculation of total loans. Secondly, the multiple of FX deposits in excess of FX loans has been raised to 1.75x (vs. 1.25x previously for all FX deposits), potentially lowering the ratios through denominator impact, wrote YF Invest in its daily report.

“According to the amendments the BRSA now asks banks to exclude loans that are shorter than 3-months maturity from total loans in the formula (which, incidentally, already excluded NPLs), but to include, as part of deposits, lira and  F/X denominated “repos of banks with real/legal persons […] and “short-term TRY financing bonds with original maturities shorter than 6 months”.

The goal behind these amendments are sort of self-evident: banks have been moving toward shorter term credit in order to minimize credit risk, while meeting the criterion (besides buying government bonds, and diversifying away from deposits to other liabilities to shrink the denominator.

This is what the BRSA has detected, and is trying to fix now. In one arguably supportive step from the banks’ perspective — especially those that do a lot of F/X lending against their F/X deposits– the BRSA increased the weight assigned to F/X deposits to 1.75 now from 1.25 earlier, but amended the formula so that a coefficient of one would apply “for the portion of this item up to the amount of F/X loans” commented a private economist via e-mail to PA Turkey who wished to remain anonymous.

Moody’s catches the culprit “at the scene of the crime”

According to Ahval News, Moody’s predicted a large increase in problem loans for Turkish banks and slashed its predictions for economic activity in the country.

Banks with high exposure to small and medium-sized enterprises, along with the tourism and transportation industries, will be particularly affected, the ratings agency said in a report on Monday.

“Problem loans will increase considerably in 2020, from 5 percent of loans in 2019,” Moody’s said. “Risk aversion among international investors will translate into constrained market access for Turkish banks, partly offset by lower loan demand.”

Moody’ said the measures adopted by the government will not prevent economic contraction this year. It said that Turkey’s economy would probably shrink by 5 percent this year, in line with a forecast by the International Monetary Fund. It had previously predicted a contraction of 1.4 percent.

The ratings agency said lower lending volumes for banks and higher provisions for loan-losses would pressure profitability, while there would be additional capital strain caused by currency depreciation.

“The authorities’ support measures will only partly offset the weakening of the credit profiles of Turkish banks,” it said.

On Monday, Turkey’s three main state-run banks said they would extend loan facilities provided during the COVID-19 pandemic with lower interest rates. The lenders will offer mortgage loans with a maturity of 15 years with a monthly interest rate of 0.64 percent and a grace period on repayment of up to 12 months.

Banks in the country will also suffer from capital raising constraints this year, Moody’s said.

“Killing the goose which lays golden eggs” commented another Turkish economist, who too wishes to remain anonymous, because criticising BRSA could lend one in jail nowadays.