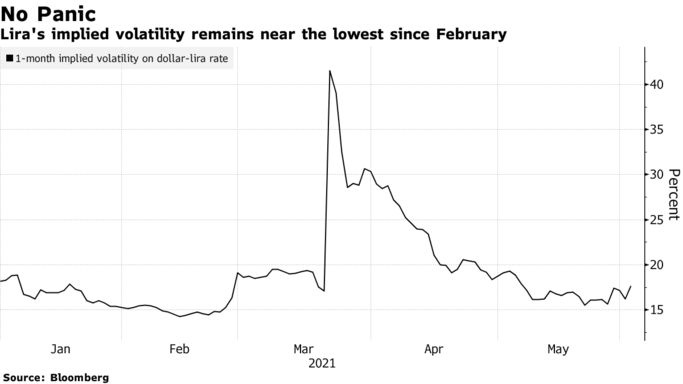 But among traders and analysts, the reaction was: we’ve all seen this before. After Erdogan fired his previous central bank governor in March, it was only a matter of time before he started bearing down on a path to lower rates.

“The Turkish story is well known and has been ongoing for a while now, so I get the sense that investors would not have been caught off-guard,” said Todd Schubert, head of fixed-income research at Bank of Singapore Ltd. “There is little risk of heavy foreign fund outflows.”

In an interview with a state broadcaster late Tuesday, Erdogan said it’s “imperative” that the central bank lower interest rates, giving a vague reference to summer months as a target date.

The lira weakened as much as 3% after the move, and then stabilized, trading 1% lower at 8.63 per U.S. dollar on Wednesday. The currency has already been battered by bets that Turkey would ease policy, plunging 14% against the dollar this year, the biggest drop among emerging-market currencies.

Data from the options market also showed signs of calm. The dollar-lira’s one-month implied volatility held near the lowest level since February. Stock moves were muted as well, with the BIST 100 Index sliding just 0.3%.

The reaction was subdued because it was so well expected, said Henrik Gullberg, a London-based macro strategist at Coex Partners. “This is what markets have been waiting for,” he added.

Investors interpreted Erdogan’s decision in March to dismiss his market-friendly central bank governor as evidence of his determination to take control of monetary policy and carry out his unorthodox plan of lowering rates in the face of sky-high inflation.

However, the weak lira and faster inflation make the job even harder for Turkey’s new central bank chief, Governor Sahap Kavcioglu. It would take an extreme depreciation in the currency, likely around a 30% decline based on historical trends, for Erdogan to change his mind over rate cuts, Gullberg predicted.

“We have seen this move several times before,” said Emre Akcakmak, a portfolio adviser at East Capital in Dubai. “Investors do not want to see yet another episode of a premature rate cut, especially now when inflation is stubbornly high.”