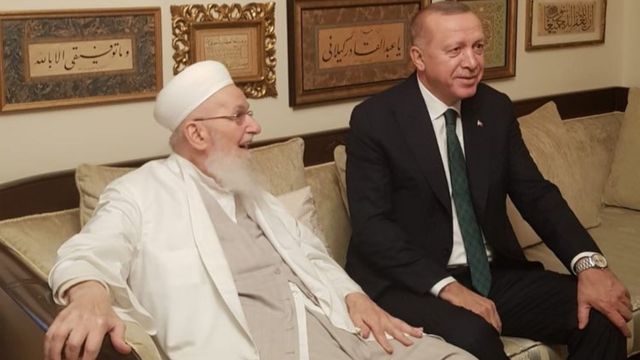 According to local news reporting, one of the members of the brotherhood, Yusuf Ziya Gümüşel, who is a founder of a foundation affiliated with the brotherhood, reportedly married his six-year-old daughter (known only by her initials H.K.G.) to a 29-year-old man 18 years ago. The story was first reported by journalists Timur Soykan and Murat Agirel, who have also shared evidence that the child was subject to sexual abuse since the age of six. The journalists who broke the case are now facing a targeting campaign against them, with some even urging officials to launch an investigation into the reporters and try them in court.

There are approximately 30 religious communities and sects in Turkey, according to Dokuz Eylül University professor Esergül Balcı, who published a research paper in 2018 on how religious communities, religious sects, and cults influenced Turkey’s education system, with over 400 branches and 800 madrassas (an Islamic religious school) spread out across the country.

According to Balci’s findings, these religious sects flourished under the ruling Justice and Development party (AKP). Similarly, Soykan, in his 2019 book about sexual exploitation by some of the Islamic religious cults in Turkey, looked into some of these groups, describing their time under the AKP as a “golden age.” In June 2022, President Recep Tayyip Erdoğan attended the funeral of the founder of İsmailağa Brotherhood, Mahmut Ustaosmanoğlu, saying, he was a man of “knowledge and wisdom of eternity.” The President also shared a video from the funeral via his Twitter.

Another research by the senior lecturer in the Department of General History Efrat Aviv at the Bar-Ilan University pointed out that:

The İsmailağa is one of the most widespread communities representing the Naqshbandi tradition in Turkey, with well over one hundred thousand members and supporters. According to Milliyet, of some 4.5 million people affiliated with the various Naqshbandi communities in Turkey, as many as 7.2 percent are attached to the İsmailağa community […] It is also known as “Çarşamba Cemaati,” referring to its main and sacred Çarşamba neighborhood in the Fatih district of Istanbul.

The child bride’s family first resided in the Çarşamba neighborhood, according to the investigation by Soykan.
The İsmailağa Brotherhood does not allow girls to study and imposes numerous restrictions on women. In 2017, the brotherhood’s television channel blurred images of women wearing no headscarf during a public service announcement by the Ministry of Labor and Social Security. According to reporting by Diken, an online news platform, “there is also a requirement that there should be no female actors in their own productions or in foreign productions. To date, no female face has appeared on the television channel.”
Speaking on a local TV Show, Soykan said, “there are thousands of children who are being indoctrinated at these cults […] We want justice and we don’t want any other children experience this.” He is calling for a complete and total shutdown of all religious brotherhoods and cults in the country.

According to researcher Salim Çevik, the ruling Justice and Development Party (AKP) “maintains a special relationship [with these communities] based on a policy of carrots and sticks.” This policy is largely dominated by the ruling party making “state resources available to these religious communities in exchange for electoral support,” opines Çevik. This is typically done by providing land or financial support for religious organizations.

A record of abuse

The brotherhoods and orders are often in the news for cases of indoctrination, child abuse, and violence. This time, in the case of forced underage marriage, it is a combination of all three and more. Soykan also revealed in his investigation that numerous officers and officials were made aware of the abuse after the victim was brought into a hospital when she was 14. Noticing the age discrepancy, a medical doctor called the police, who then questioned the family and the girl. The family lied to the police at the time, hiding the victim’s real age and instead saying she was 17 and was married of her own will. Instead of asking for the victim’s birth certificate, the prosecutor’s office at the time requested a bone age assessment. The family used their connections and swapped their daughter with a 21-year-old woman for the test. The case was closed, and the victim was sent back with her family to endure further abuse at the hands of her husband.

H.K.G. is now 24. Two years ago, she managed to escape her family and move to a different city, where she now lives in a dorm and is trying to complete her studies. Her escape was precipitated by an incident of severe physical abuse, after which she went to the prosecutor’s office on November 30, 2020, to file a complaint. She brought evidence of the abuse and photographs of her as a child bride, as well as a secret audio recording with her husband in which she talks about her story with her husband, asking him why he and her parents abused her. But neither the parents nor the husband were arrested. Instead, the parents claim their daughter suffered from psychological issues and that she is lying. It took two years for the prosecutor’s office complete an indictment in which the prosecutor concluded that the parents condoned the rape and that the victim’s husband and parents were complicit in the sexual abuse of a child. The prosecutor asked for at least 27 years in prison for each of the perpetrators and an additional penalty for the husband on the charge of sexual assault.

In the meantime, the foundation, which the victim’s father founded, released a statement on its homepage that the investigations about the child bride have nothing to do with the foundation’s work. The foundation also removed any mention of Yusuf Ziya Gümüşel, the father, from its website, according to reporting by Diken newspaper.

There has been an outpouring wave of criticism about the case. Journalist Ahmet Hakan wrote, “I saw the indictment prepared by the prosecutor’s office. I read the audio recordings. I reviewed the allegations. I am ashamed of my humanity. This is pure pedophilia.”

Similarly, the Mayor of Istanbul Municipality, Ekrem İmamoğlu, expressed his disbelief in what has happened. “I don’t understand how a 6-year-old girl’s marriage can be real. This is unscrupulous, this is immoral, this is child abuse. Everyone who is making concessions and is ignoring this issue is complicit in this crime,” the mayor said in a statement.

In a statement, another politician and the IYI Party Chairman, Meral Akşener, vowed to investigate the “marriage” of a six-year-old girl with a cult follower.

Meanwhile, the spokesperson for the ruling Justice and Development Party, Ömer Çelik, said the party was closely following the investigation. “We condemn the abuse of children. Child abuse is a cursed crime that will never be forgiven,” tweeted Çelik in response to mounting criticism.