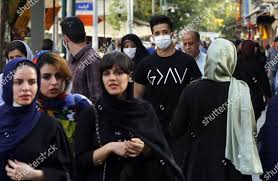 PA Turkey closely follows the progress of Covid-19 epidemics in Syria, Iraq and Iran, because these countries are large trade partners of Turkey, with substantial legal and illegal human tracking. We are always on the watch for possible cross-country infections.  Yesterday, Iraq reported a record 519 cases, as EWARN claimed there may be as many as 19 Covid-19 patients in northwestern Syria, which abuts the Turkish border. Iran should also serve as a case study for Turkey in terms of demonstrating the risks of early normalization and insufficient public education about the dangers of the virus.  Arab News reports that the situation in the country remains bleak.

TEHRAN: Iran on Tuesday lamented that people were ignoring social distancing rules as it reported more than 3,000 new coronavirus infections in a second cresting wave.

“The fact that people have become completely careless regarding this disease” was of great concern, said Health Minister Saeed Namaki.

“They either have total confidence in us or think the coronavirus has gone. The latter is not true at all,” the ISNA news agency quoted him as saying.

His remarks came as Iranian Health Ministry spokesman Kianoush Jahanpour said 3,117 new cases were confirmed in Iran in the past 24 hours.

Infections have been on a rising trajectory in the Islamic republic since hitting a near two-month low on May 2. They were at their highest on March 30 after hitting 3,186.

Jahanpour said the virus had claimed another 64 lives in the past day, raising the overall death toll to 7,942.

The latest caseload was close to the highest daily count for the Middle East’s deadliest outbreak of COVID-19.

The government has largely lifted the restrictions it imposed to stem the outbreak that first emerged in mid-February.

Experts both at home and abroad have voiced scepticism about Iran’s official figures, saying the real toll could be much higher.