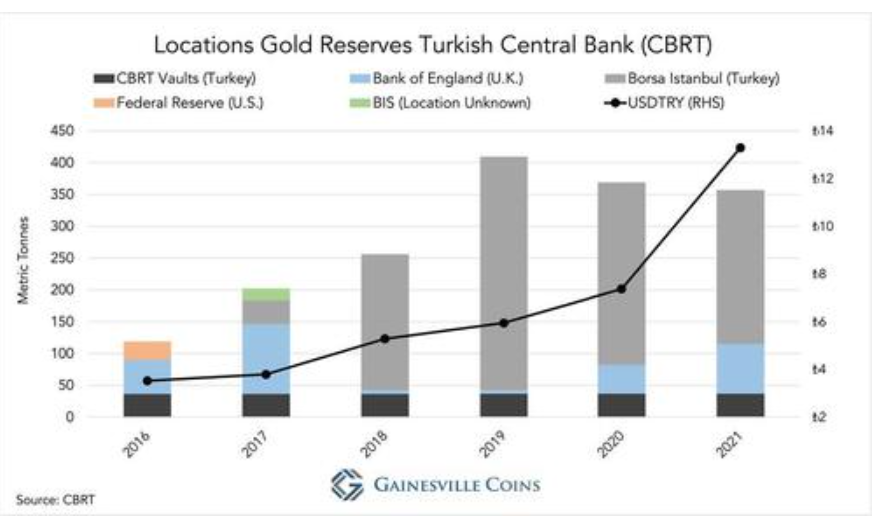 After having repatriated 104 tonnes from the Bank of England (BOE) in 2018, the Central Bank of Turkey (CBRT) has been sending gold back to London in 2020 and 2021. Amid economic turmoil that’s weakening the Turkish lira, CBRT is likely using its gold at BOE as collateral for foreign exchange (FX) loans. Turkey’s situation is reminiscent of Venezuela several years ago.

Computing Turkey’s net gold reserves is complicated, because since 2011 CBRT and the Turkish Treasury have launched several schemes to borrow gold, which all show up on the central bank’s balance sheet. Simplified, what I have done is take the tonnage “owned by the central bank” in CBRT’s annual report—this excludes gold submitted by banks for reserve requirements and the Treasury’s gold—and subtracted outstanding Turkish lira for gold swaps*.

The World Gold Council (WGC) computes Turkish net gold reserves differently. My estimate for Turkey’s net gold reserves on December 31, 2021, is 354 tonnes, roughly 300 tonnes less than what the IMF reports, while the WGC discloses 394 tonnes. A more detailed discussion on this topic can be found in the Appendix.

*A swap in this article refers to a spot sale (for example, selling gold for dollars) that is unwound by a forward transaction (buying gold with dollars) for a slightly higher price reflecting an interest rate. A swap can also be viewed as a collateralized loan (borrowing dollars with gold as collateral).

In 2017 and 2018 CBRT repatriated all its gold from the Federal Reserve Bank of New York (FRBNY) and the Bank for International Settlements (BIS), and all but 6 tonnes from BOE, according to its annual reports. All the repatriated gold was moved into the vaults of Borsa Istanbul. CBRT is highly influenced by Turkish President Erdogan, who has strained ties with the West. The central bank prefers to store gold on its own soil, preventing rivals from having leverage in disputes.

Yet in 2020 CBRT began shipping gold back from Turkey to London, which is one of the most liquid gold markets globally. At the end of 2021 CBRT was holding 78 tonnes at the BOE. Possibly, it wants to hold gold in London for an emergency sale. More likely the gold is being swapped for FX to defend the lira or make international payments.

Turkey’s economy is in dire straits. Consumer price inflation is at 80% and the Turkish lira has lost 90% of its value versus the U.S. dollar in less than 14 years. The currency crisis is eating into Turkey’s FX reserves.

The similarities between Turkey and Venezuela are striking, first and foremost because both countries’ economic policy is irrational. In 2011, socialist Hugo Chavez, then President of Venezuela, ordered 85% of the central bank’s gold reserves to be repatriated in an act of economic nationalism. Two years later, due to ruinous monetary policy, inflation reached 40% and the Venezuelan bolivar began its steep descent. In need for FX the Venezuelan central bank (BCV) signed a swap agreement, using its gold that was still in London, with Citibank in 2015. “The value of the gold will continue to appear on the Central Bank’s balance sheet,” it was reported at the time.

In 2016, I reported that BCV was shipping its gold to Switzerland in need for more FX. Financial conditions didn’t improve in Venezuela led by socialists, and in 2017 BCV allowed a swap to lapse. The gold collateral was lost. By then Venezuela had already reached hyperinflation.

In the following years Venezuela continued to sell monetary gold abroad to pay for the imports of basic goods. In addition, current President Maduro makes money off smuggling conflict gold. How much monetary gold BCV has left is any one’s guess.

By Jan Nieuwenhuijs of Gainesville Coins, excerpt only