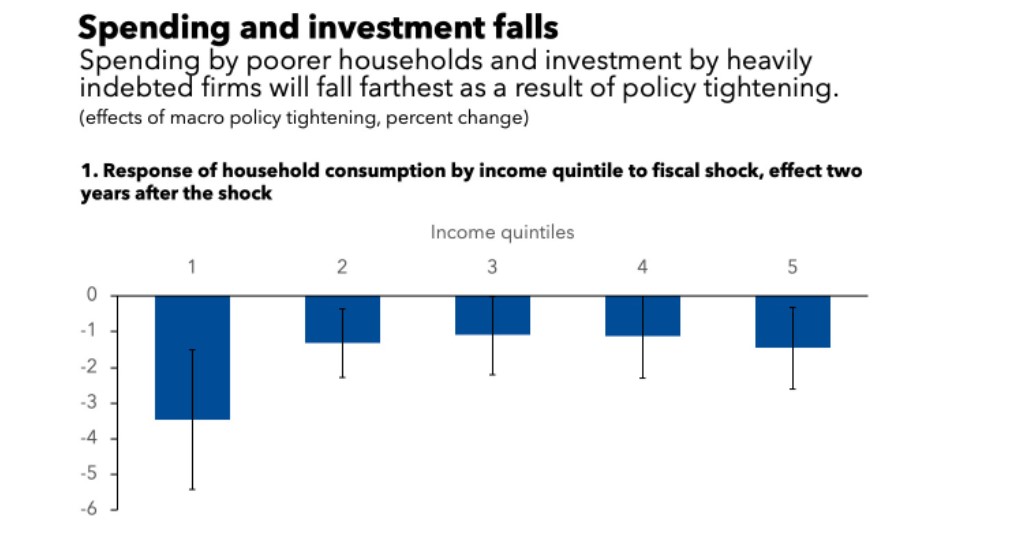 Governments succeeded in lessening the economic pain of the pandemic by providing plenty of liquidity to stricken consumers and businesses through credit guarantees, concessional lending and moratoriums on interest payments.

But although these policies proved effective in supporting balance sheets, they also led to a spike in private debt, extending a steady increase in leverage spurred by supportive financial conditions since the global financial crisis of 2008.

Global private debt surged by 13 percent of the world’s gross domestic product in 2020—faster than the rise seen during the global financial crisis and almost as fast as public debt.

We estimate that recent levels of leverage could slow economic recovery by a cumulative 0.9 percent of GDP in advanced economies and 1.3 percent in emerging markets on average over the next three years.

Aggregate figures do not tell the whole story, however. The impact of the pandemic on the finances of households and firms has varied across countries and within them, reflecting differences in their policy responses and the sectoral composition of their economies.

For example, contact-intensive services such as entertainment contracted as people stayed at home, but production and exports of computers, software and other goods expanded as consumers spent more on appliances.

The impact on consumer and business balance sheets, especially those most exposed to the pandemic, differed greatly depending on the support provided by governments.

Our analysis shows that the post-pandemic drag on growth could be much larger in countries where (1) indebtedness is more concentrated among financially stretched households and vulnerable firms, (2) fiscal space is limited, (3) the insolvency regime is inefficient, and (4) monetary policy needs to be tightened rapidly.

Low-income households and vulnerable firms (highly indebted and unprofitable businesses that are struggling to make interest payments) are typically less able to withstand a high level of debt. As a result, they are likely to make sharper cuts to consumption and investment spending in the future. The drag on future growth is therefore expected to be greatest in countries that experienced the largest increases in indebtedness among low-income households and vulnerable firms during the pandemic.

Consumers in China and South Africa saw the largest increases in household debt ratios among the countries for which detailed data are available. But the experience of households in these two countries was very different: in China leverage increased the most among lower-income households whereas households with higher incomes accounted for most of the increase in South Africa.

Among advanced economies, low-income households in the United States, Germany, and the United Kingdom saw comparatively larger increases in debt than those in France and Italy, where leverage actually declined for poorer households.

(Editor’s Note:  Business loans expanded 4%% YoY in nominal terms in Turkey, as more leverage will be piled up on them thanks to a $10 bn “project financing” facility recently made available by the Central Bank.  It is extremely questionable whether the massive funding to these business go to investment. It is more likely that the funds are used to delay insolvency or pad the pockets of owners.)

As economies recover and inflation accelerates, governments should take account of the impact of fiscal and monetary policy tightening on the most financially stretched consumers and businesses when pacing the exit from extraordinary support policies.

Where the recovery is well underway and balance sheets are in good shape, fiscal support could be reduced faster, facilitating the work of central banks. Elsewhere, governments should target fiscal support to the most vulnerable in the transition to recovery while keeping within credible medium-term fiscal frameworks.

To prevent rapid tightening of monetary policy from causing large and potentially long-lasting disruptions, policymakers should pay close attention to adverse developments in the financial sector.

This is especially important in countries where a wave of bankruptcies in sectors heavily hit by the pandemic could spill over to the rest of the economy. Governments in these countries could incentivize restructuring over liquidation and, where necessary, extend solvency support.

Authorities should also enhance restructuring and insolvency mechanisms (through dedicated out-of-court restructuring, for instance) to promote a rapid reallocation of capital and labor toward the most productive firms.

(Editor’s Note:  Commercial courts in Turkey are known for their slow pace and lack of knowledge about industry specifics. Though prices data is hard to find, anectodals suggest it takes at least two years to resolve a basic insolvency.)

Similarly, if large household debts threaten recovery, governments should consider cost-effective debt restructuring programs aimed at transferring resources to relatively vulnerable individuals who are more likely to spend their income. These programs should, by their design, seek to minimize moral hazard.

In short, the recent surge in indebtedness of households and firms poses risks to the pace of recovery. Yet this risk is not equally distributed. Careful, real-time monitoring of the balance sheets of low-income households and vulnerable firms is key to calibrating the unwinding of support measures. This could prevent sudden distress when financial conditions tighten.

—This blog, based on Analytical Chapter 2 of the April 2022 World Economic Outlook, “Private Sector Debt and the Global Recovery,” also reflects support from Evgenia Pugacheva and Yarou Xu.