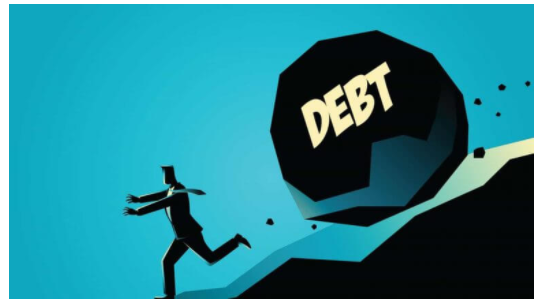 Global debt dipped in the third quarter of 2021 though it remained near the record high set in June, while debt in emerging markets (EMs, Developing Nations) hit a fresh record high of $92.5 trillion, a report showed on Wednesday.  The debt splurge of EMs raises the question of how it will be serviced, if the world moves from reflation to stagflation. As well, faster-than-expected tightening by major Central Banks could  imperil debt service  capacity.

Total debt, including that owed by governments, households and companies, dipped to $296 trillion at the end of September, after an increase to record highs in the second quarter. It stands about $36 trillion above pre-pandemic levels.

The ratio of debt to annual global economic output fell more than 10 percentage points from July through September, hitting 350% at the end of the third quarter, as economies across the globe recover from the pandemic-induced slowdowns, data from the Institute of International Finance showed.

Debt to GDP in China has risen 25 percentage points since the end of 2019 to 330%, accounting for more than 80% of emerging market debt buildup over the period. Emerging market government debt remained at about 63% of GDP, a record level.

In emerging markets excluding China, total debt hit a record high of $36.4 trillion, largely driven by increasing government debt, but external debt is on track to drop below 43% of GDP in 2021 from an all-time high of near 46% in 2020.

“With political and social pressure limiting governments’ efforts to reduce deficits, high government financing needs represent a source of vulnerability in many countries in the face of broader revenue weakness,” the IIF report said.

The fashion by global fund industry to take rate,  well as currency risks, raises the specter of  sudden withdrawal, if central banks continue with rate increases in 2022, as USD continues to rise.

Indonesia and Russia saw the sharpest drop in foreign ownership, while demand increased in China, Peru and Korea.

In foreign exchange debt, Turkey, Saudi Arabia and Colombia have seen the sharpest increases in relation to GDP since the start of the pandemic.

In developed markets, debt declined by $1.4 trillion last quarter, the IIF said, with the sharpest declines in Japan and the euro area.

A large part of spending in developed markets went to social net and health, while still only a very small part is destined to environmental protection and climate change.

“With decarbonization efforts on the rise, many governments are expected to channel significantly more resources towards climate priorities, with major implications for government debt (and) interest rates,” said the IIF.

Borrowing by Developing Nations and their corporates is enticed by historically low dollar interest rates.  As long as these hover round zero, and  EMs register strong growth, refinancing will not pose a problem.

However, some Fed officials are already talking about a 3-4% fed funds rate by 2024.   Unless US is in a steep recession, the jump in short rates ought to pass through partially to 10-30 year government bond yields.  Additionally despite Fed’s assurance of a very gradual transition to monetary tightening, investors began to project stronger USD in 2022.  An upward shift in the dollar yield curve, coupled by strong dollar  is a nightmare for EMs which are credit dependent. Countries with weak external accounts could be forced to declare debt moratoria, as heavily indebted, low-growth companies could be forced into insolvency.

The world badly needs a prolonged episode of reflation for EMs to work out their debt dilemma.