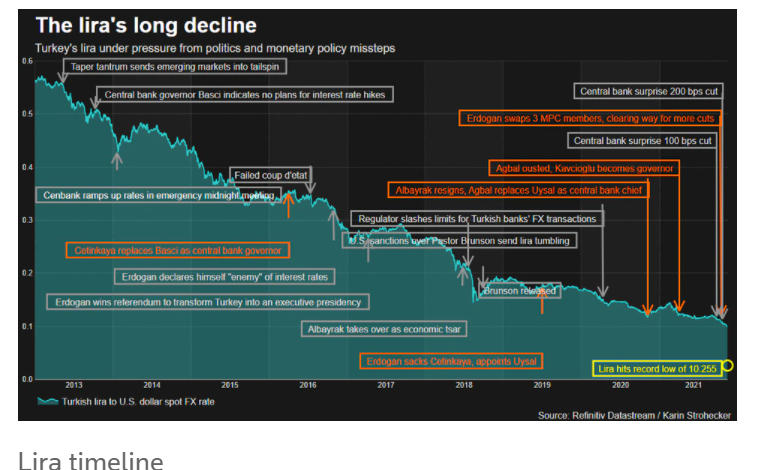 Turkey’s lira plunged 6% on Thursday, breaching 11 to the dollar for the first time after another interest rate cut, while South Africa’s rand fell over 1% after a surprise rate hike was overshadowed by the lira’s decline.

The lira’s  to  above 11.00 vs USD saw most other emerging market currencies deepen losses. Russia’s rouble RUB=, which was flat on the day, slipped 0.5% to beyond 73 per dollar, while Mexico’s peso MXN= slid 1%.

“Maybe the likes of South Africa and Russia may se

e flows diverted away from Turkey, but won’t likely cause more that a slight increase in volatility. I think Turkey’s crisis is quite self-contained.”

The central bank has “narrowly avoided fueling a full blown currency crisis today by including a reference to potentially halting the cutting cycle in December,” said Simon Harvey, senior FX market analyst at Monex Europe. “However, terminology around such a decision remains loose. Therefore, pressure on the lira remains.”

Turkish companies and the government have to repay $13 billion in foreign-currency debt in the final two months of the year. More than half – $8 billion – is set to mature in November, the biggest amount due over the next 10 months, according to the latest available data.

“The decision to cut rates is politically motivated even with their December forward guidance,” said Saed Abukarsh, chief portfolio manager at Ark Capital Management Dubai. “Confidence in any form of central bank credibility has left the door.”

“This move of the lira is insane yet totally predictable,” said Win Thin, global head of currency strategy at NY-based Brown Brothers Harriman & Co. “When you’re doing worse than the Argentine peso, that’s quite a statement.”

“The sharp falls in the lira over the past few days clearly weren’t enough for Turkey’s central bank to stand up to President Erdogan,” said Jason Tuvey at Capital Economics.

“How events unfold from here is extremely uncertain.”

With the Turkish lira sinking to new lows against the US dollar every day, hedge funds report that their foreign exchange prime brokers (FXPBs) are wary of taking on risk as the currency continues to slide, claimed Risk.net.

The Central Bank of the Republic of Turkey cut the one-week repo rate 100 bps to 15%. As a result, the lira is weaker for the eighth consecutive session. The lira’s weakness not only fuels inflation but also will challenge companies and banks with foreign exchange exposure. The dollar finished last month near TRY9.60 and after the rate hike, pushed above TRY10.97 before stabilizing, according to Marc Chandler of  Seeking Alpha.