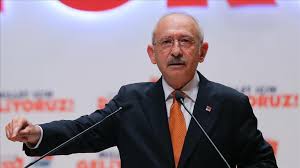 The government continued its accusations and tactics of intimidation against CHP Group Deputy Chair Ozgur Ozel and Istanbul Chair Canan Kaftancioglu this week, alleging their involvement in a coup plot, prompting columnist Yildiray Ugur to note that “the rulers have been facing an imaginary coup for days” and “boxing with shadows.”

This week, a discussion program on an opposition channel was targeted. The Supreme Council of Radio and Television (RTUK) decided to halt a television program on Halk TV for five weeks and levy an administrative fine after Kaftancioglu said, “Either by a snap election or another way, the government will lose its power.”

The discussion program in question had attracted attention since the participants talked about a broad range of subjects despite the censorship in the Turkish media.

Besides Ozel and Kaftancioglu, a writer for the leftist Evrensel newspaper, Ragip Zarakolu, was charged with calling for a coup because of a column he wrote titled: “No Escape from the Future of Ill Fortune.”

In his column, Zarakolu compared the rule of the AKP and Erdogan to Turkey’s first democratically elected leader, Adnan Menderes, who was ultimately overthrown and executed in 1961. Erdogan filed a criminal complaint against the columnist, Evrensel’s managing directors and the news site Artı Gercek, over the opinion piece which he said was “touting a coup.”

Opposition claims the coup allegations reflect the government’s  inability to deal with the economic crisis and currency weakness.

In a counteroffensive, CHP leader Kemal Kilicdaroglu  lampooned the administration:  “Turkey will have the most expensive and modern junk metal at 2.5 billion dollars,” said Kilicdaroglu in reply to journalists at the party headquarters.

Turkey’s decision to purchase the S-400 from Russia infuriated the country’s NATO allies, which have been pushing Ankara to avoid activating the system.