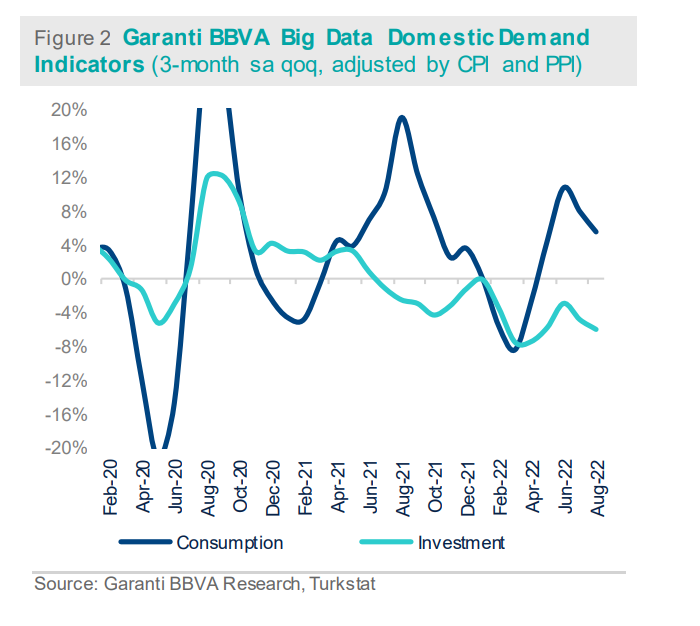 Industrial production (IP) continued to surprise to the upside and grew 8.5% y/y in calendar adjusted terms in June. IP also recovered by 1.3% m/m in the adjusted series. Although quarterly IP growth decelerated to 1.1% in 2Q down from 2.1% in 1Q, the unadjusted annual growth rate remained almost the  same at 10.5% due to calendar day effects. According to our big data demand proxies and other high  frequency indicators, our monthly GDP indicator nowcasts a quarterly GDP contraction of near 1% in early August, which corresponds to a yearly growth rate of near 3% with 23% of information.

The  deceleration signals in early indicators and potentially lower external demand in the rest of the year put   downside risks on the growth outlook. However, solid economic activity during the first half of the year  and continuation of loose economic policies lead us to maintain our 2022 GDP growth forecast at 5%.

IP remained robust in 2Q despite some deceleration

In seasonal and calendar adjusted series, monthly IP recovered in June (1.3% m/m) on the back of  consumer and intermediate goods (4.7% and 1.1%, respectively), whereas capital and energy goods production contracted in monthly terms (-2.4% and -1.4%, respectively). In terms of quarterly trends, although there was some deceleration to 1.1% q/q in 2Q22 (vs 2.1% q/q in 1Q22), IP growth remained solid. The slow-down was pretty clear in intermediate and durable consumer goods production, but the improvement in capital, energy and non-durable consumer goods production helped not to have a much faster deceleration in overall IP in 2Q22.

In the sectorial details, clothing, motor vehicles and electrical equipment were the main drivers in monthly IP growth and differentiated much more positively on behalf of the exporting sectors. In this regard, still supportive external demand seemed to provide an absorption capacity against a clearer downturn in domestic demand-oriented production. Therefore, despite the spill-over effects from the war in Ukraine and tighter global financial conditions, activity remained resilient on the back of extra loose monetary policy, continuing credit and fiscal impulses and other supportive economic policies.

Looking ahead, our IP forecast for July  has  signaled that industrial production could contract on monthly basis. Other leading indicators such as manufacturing PMI in July (46.9 vs 48.1 in June and 48.8 in 2Q), contraction in electricity production (-4.7 y/y in July-August so far vs. +0.5% y/y in 2Q), deceleration in loan growth on top of recent macroprudential measures and decline in confidence indicators signal that economic activity will decelerate more clearly in the coming months.

On the one hand, according to our big data demand indicators, domestic demand starts to adjust and slows down significantly in early 3Q. Private consumption has started to recover from the previous weeks’ weaker growth rates but keeps decelerating compared to 2Q. Besides, investment demand contracts much faster if July-August period is considered. On the other hand, the positive contribution from net exports comes down due to stronger imports even though exports still remains supportive. All in all, economic activity has started to decelerate more clearly in 3Q on every front but ongoing growth supportive policies by means of much looser policies help absorbing downward pressures despite the cumulating downside risks in both domestic and external demand.

According to our calculations, the economy might have grown slightly above 7% y/y in the first half of the year with still strong depletion from inventories, which should be reversing in the coming periods. However, in early 3Q we still calculate some depletion of stocks because of the late adjustment of demand factors. Thus, inflationary risks remain alive once these inventories are restored.

Larger negative real interest rates, credit and fiscal impulses and resilient external demand helped economic activity to grow above its potential in the first half of the year, and both domestic and external demand contributed positively.

Looking ahead, much tighter global financial conditions and clear downside risks to external demand –particularly weaker growth in Europe- create uncertainty on the domestic growth outlook. Moreover, side effects from the recent so-called macro-prudential measures have started to add noise in terms of financial stability as credit growth rates adjust accordingly. According to our nowcasts, the GDP growth rate has started to demonstrate a much faster deceleration in early August after the strong resilience of the economy in the first half of the year. However, given the political decision to maintain pro-growth policies at all costs, we expect a more countercyclical stance from fiscal accounts attached to the continuation of ultra-loose monetary policy.

Therefore, while we maintain our 2022 GDP growth forecast at 5%, this implies significant downside pressure for next year GDP growth, an elevated current account deficit, substantial financial stability risks and likelihood of a persistently high inflation environment, depending on the timing of the normalization of the economic policies towards orthodoxy.