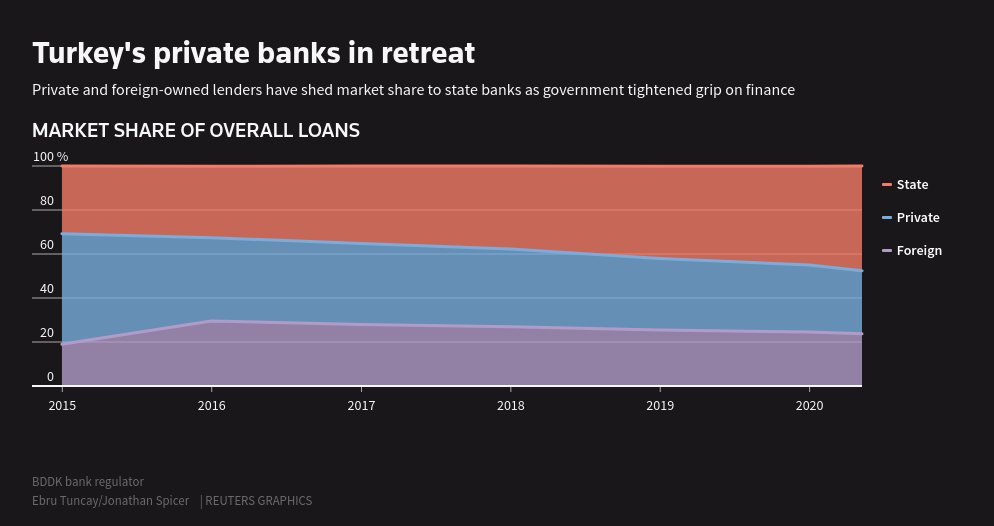 Financial fallout from the coronavirus crisis could hasten mergers or retreats by some of Turkey’s private and foreign-owned banks, ceding more ground to state-owned lenders, bankers and analysts say, claims Reuters.

Years of government pressure to defer dividends and drive Turkey’s stop-start growth have tested the patience of shareholders, who bankers and analysts say are unlikely to back new capital raisings or battles for market share.

If private banks do consolidate or retrench, this would tighten Ankara’s control over a financial sector in which state banks play an increasing role and accelerate a shift of foreign investors away from Turkish assets, nine bank executives, advisers and analysts interviewed by Reuters said.

In the last six months, Italy’s UniCredit cut its stake in Yapi Kredi and Britain’s HSBC also considered pulling back.

Turkey’s Treasury says its banks have been successful in rolling over foreign debt even during crises and have ample liquidity to keep credit flowing through the latest downturn, which is the second within as many years.

Private banks will soon have to choose whether to extend loans and raise capital or stand aside, a bank executive said.

But a senior adviser to Turkish banks said it would be “out of the question” for shareholders to agree to raise capital given the risks of doing business in Turkey.

“If an opportunity comes, private bank owners would consider rushing to the exit. But there is currently no way out,” the adviser said, citing the unfolding pandemic, hard-to-value assets and a lack of buyers.

Istanbul-listed bank stocks have fallen 26% this year, as state-owned Ziraat Bank, Vakifbank and Halkbank (HALKB.IS) – the only listed public bank – increased market share. They now account for 48% of loans, from 30% at the end of 2014.

Turkey’s 40 or so private banks were left holding tens of billions of dollars of non-performing loans after a 2018 currency crisis.

“The sector is becoming increasingly controlled by the government and it might trigger private bank exits,” the first banker said.

Another factor likely to drive change is the rising cost of regulation, such as a series of new rules which tightened Ankara’s grip over FX markets and banks last year.

While net profit at state banks rose 83% year-on-year in the first quarter of 2020, this compared to 9% and 4% respectively for private and foreign rivals.

“You can’t have changes in the regulatory framework every week. This has become too common and has to settle down,” a senior bank executive said. “Those that fare better may buy the stakes of banks that can’t manage these costs.”

Some such as Francis Malige, managing director for financial institutions at the European Bank for Reconstruction and Development, said that because Turkish firms are in good shape, this reduces the pressure to merge in the short-term.

“I would not be surprised if there’s consolidation but I wouldn’t expect it to be immediate” because it typically happens after the acute phase of financial crises, he said.