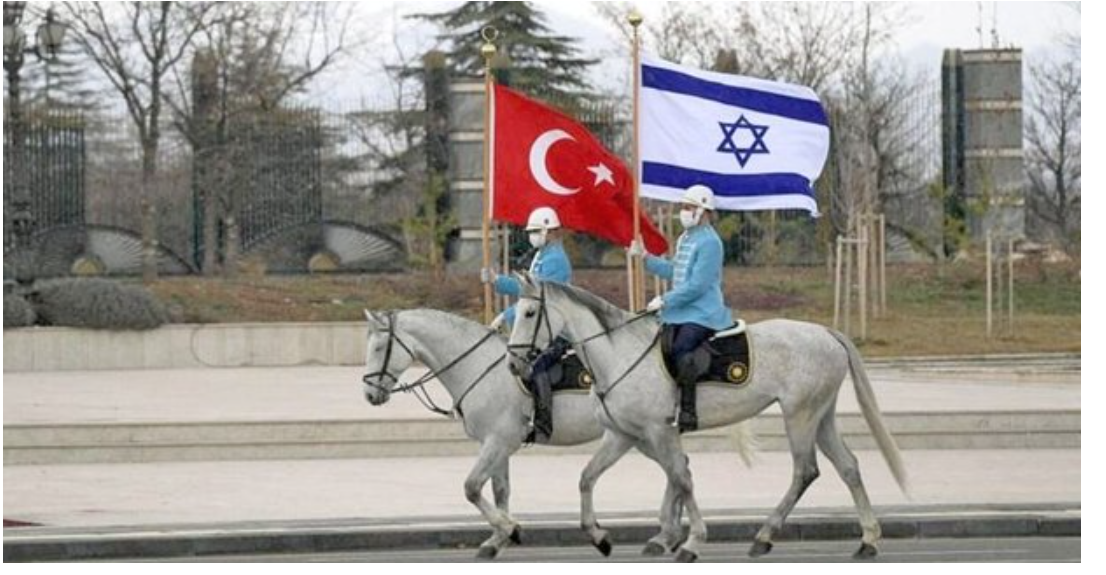 The pillars of the Israel-Turkey relationship—energy and defense cooperation—require long-term agreements built on mutual trust, not Erdogan’s capricious vacillation between enmity and cooperation.

Turkey hosted Israel’s top defense official last Thursday for the first time in over a decade. While some are heaping praise on Ankara, the visit by Israeli defense minister Benny Gantz is just the latest development in Turkey’s disjointed Israel policy, which fluctuates between hostility and opportunism.

Israel and Turkey used to be good friends—two non-Arab outliers in the Middle East. But the rise of Turkey’s Islamist, anti-Israel President Recep Tayyip Erdogan in the early 2000s and the 2010 Mavi Marmara incident—an attempt by Hamas-aligned Turkish activists to forcibly overrun Israel’s blockade of the Hamas-controlled Gaza Strip—saw an end to that. Turkey downgraded relations, expelled Israel’s ambassador, and engaged in increasingly hostile rhetoric towards the Jewish state.

Israel appeared to mend the fence in 2013 when it apologized for the incident. As part of a reconciliation deal in 2016, the two countries restored ambassadors and Israel paid the families of those who died in the incident.

Yet as relations seemed to be improving, the Turkish state-owned Halkbank facilitated the illegal transfer of billions of dollars to the Islamic Republic of Iran, which has called for Israel to be wiped off the map. Ankara then torpedoed Turkish-Israeli relations in May 2018 after President Donald Trump moved the American Embassy in Israel to Jerusalem, with Erdogan expelling Israel’s ambassador and falsely accusing Israel of “genocide,” “apartheid,” and of being a “terrorist state.”

Renewed cooperation was on full display this June when Turkey and Israel foiled multiple Iranian terrorist attacks planned against Israelis and Jews on Turkish soil. During Gantz’s visit, he thanked Erdogan for this cooperation and announced the gradual resumption of defense ties. However, Gantz also expressed frustration that Ankara continues to allow Turkish-based Hamas leaders to coordinate and fund attacks in the West Bank.

On October 20, Israel charged three of its citizens with spying for Iran-backed Hamas by gathering information on the cellular network of Israeli telecom Cellcom. According to the prosecution, the main defendant passed sensitive information to Hamas operatives in Turkey, and his handler was under the command of Saleh al-Arouri, the Turkish-based head of Hamas activities in the West Bank. Ankara hosts dozens of other senior Hamas leaders and even allows Hamas to have an official representative in the country. Though according to Israeli media, Turkey began deporting Hamas members in 2022, reports by other outlets contradict this.

The Cellcom incident was far from isolated. Just this year, Hamas members based in Turkey have allegedly helped an East Jerusalem man establish charitable organizations as embezzlement fronts, provided weapons training to Palestinians, and funneled money to pay the families of Palestinians killed or imprisoned by Israel for terrorism offenses.

WATCH:  Turkey vs Greece: War in the Aegean?

Given this history, why was Gantz invited? First, Erdogan is seeking a third term as president when he is arguably at his weakest politically. His unpopularity is mainly due to the country’s sluggish economy, which Erdogan has run into a ditch by insisting on unorthodox economic policies. This has led to record levels of annual inflation (83 percent), currency devaluation, and the erosion of the country’s middle class.

Erdogan’s position is also precarious due to increasing reliance on Russia since 2016 for energy security, weapons procurement, and Turkey’s “security” goals in Syria. Vladimir Putin’s isolation and toxicity following his invasion of Ukraine have forced Turkey to look elsewhere.

While Putin has signaled that he would like to make Turkey “an energy hub” for transporting Russian natural gas to the region, Ankara ultimately remains too isolated and excluded from regional energy cooperation, the East Mediterranean Gas Forum in particular. Turkey has expressed its willingness to reduce its dependence on Russia by helping pipe Israeli gas to Europe, but Turkey’s prospective deal is little more than a pipe dream.

Erdogan’s charm offensive with Israel signals that Turkey can turn on a dime and reduce its dependence on Moscow. In doing so, Erdogan continues to gesture to regional powers, such as Egypt, the United Arab Emirates, and Turkey’s Western allies, that it remains relevant and, to a limited degree, can be an asset. Turkey’s brokering of a major grain shipment deal from Ukraine that helped avert a world food shortage and the sale of TB2 drones to the Ukrainian military demonstrated its utility.

Israel has several interests in improved ties with Turkey, but the most direct one is inducing Turkey to expel Hamas. Beyond that, there is value in being on good terms with what is arguably the strongest military in the Middle East, a major energy rival, and a country that is operating in Syria, close to Israel.

The pillars of the Israel-Turkey relationship—energy and defense cooperation—require long-term agreements built on mutual trust, not Erdogan’s capricious vacillation between enmity and cooperation. Ejecting Hamas would be a good start, and the decrease in overt hostility is certainly positive, but Gantz’s visit is, at best, window dressing on a cold peace.

David May (@DavidSamuelMay) is a research manager and senior research analyst at the Foundation for Defense of Democracies, where Sinan Ciddi (@SinanCiddi) is a nonresident senior fellow. Follow FDD on Twitter @FDD. FDD is a Washington, DC-based nonpartisan research institute focusing on national security and foreign policy.