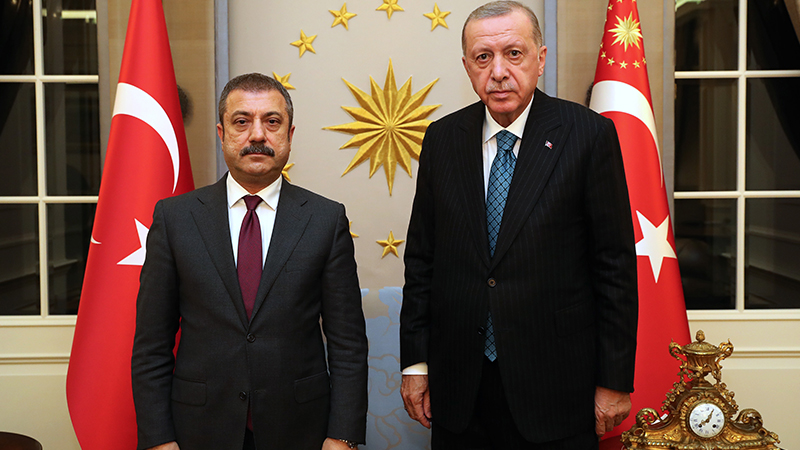 Turkish President Recep Tayyip Erdogan fired three members of the central bank’s interest-rate setting committee in a midnight decree after meeting with Governor Sahap Kavcioglu on Wednesday evening. The lira dropped to a record low against the dollar.

Erdogan removed deputy governors Semih Tumen and Ugur Namik Kucuk, along with Monetary Policy Committee member Abdullah Yavas, according to the decree. He appointed Taha Cakmak as deputy governor and Yusuf Tuna as an MPC member.

The changes follow a meeting between Erdogan and Kavcioglu on Wednesday evening, where the two discussed changes to the committee, people familiar with the discussion told Bloomberg earlier. Kucuk was the only member of the committee who voted against Kavcioglu’s interest-rate cut last month, according to people with knowledge of the matter. Yavas didn’t vote because he had contracted Covid-19 in the U.S., where he lives.

The changes rid the committee of members who disagreed with Erdogan’s calls to continue cutting interest rates, according to people familiar with the composition of the committee.

Kavcioglu was appointed by Erdogan to lead the central bank in March, replacing his hawkish predecessor Naci Agbal. Last week, Erdogan’s office refuted a media report that said Erdogan is “cooling” on Kavcioglu in the job.

Erdogan has described himself as an “enemy” of interest rates, and espouses an unconventional theory that lowering interest rates will lead to lower inflation. The inflation rate was 19.6% in September, when Kavcioglu lowered the benchmark interest rate by 100 basis points to 18%.

The meeting between Kavcioglu and Erdogan came after the lira slipped to a record low earlier on Wednesday, extending its losses to nearly 5% against the dollar since the governor delivered his surprise cut on Sept. 23.

The Turkish presidency posted a picture of the two men together on Twitter after the meeting, and Erdogan’s office described the conversation as “positive.” The presidency also said the two men discussed the general economic situation.

The central bank declined to comment on the details of the meeting.