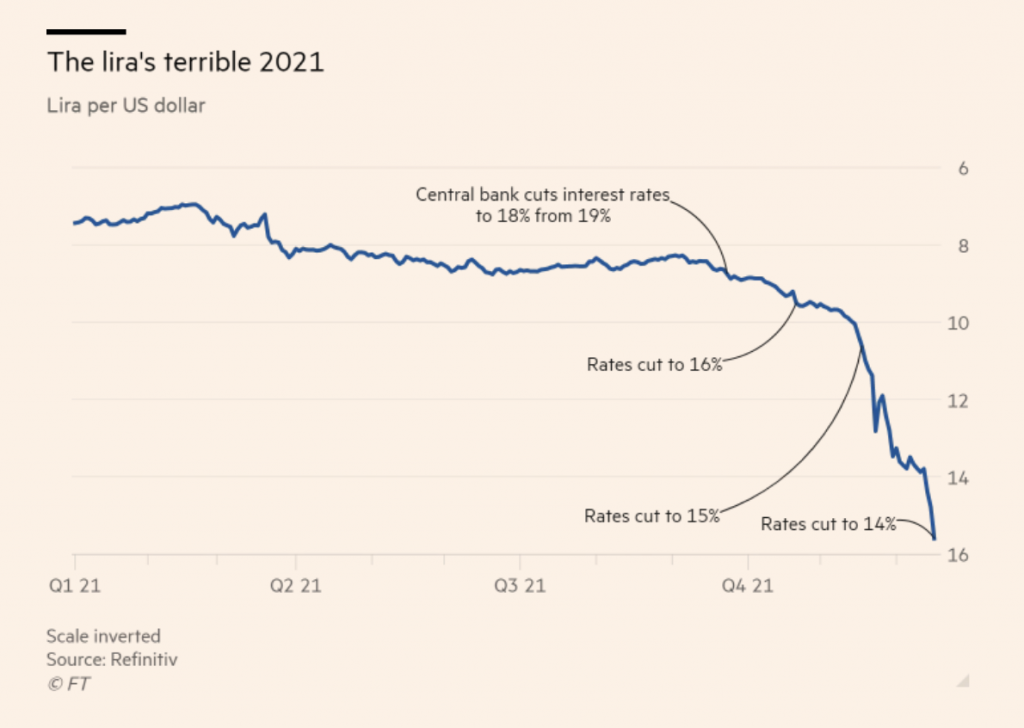 Turkey’s President Tayyip Erdogan said on Friday the government had burst a bubble in the foreign exchange market by taking steps this week to protect lira deposits against volatility.  Indeed, after peaking at 18.5 dollar/TL pai closed at 10.93 on Friday.  Erdogan’s bragging notwithstanding, there are no takers of Turkish Lira stability  view.

“We have seen the bubble on the foreign exchange rates disperse in a day with our package of measures,” Erdogan said, adding that the government had gone ahead with its low-rate economic plan despite internal opposition.

Ahead of a meeting with economists and academics, Erdogan said Turkey economy would enter a very different environment in the summer thanks to the “new economic model”.

The Turkish lira had plunged on Monday to an all-time low of 18.4 to the dollar, following a months-long slide due to unorthodox interest rate cuts and fears of an inflationary spiral.

On Friday, he said he expected companies and sellers to cut their prices following the rebound of the lira, including on cars and houses – adding that the government will track down those who do not.

Reuters commented that:  While his plan to defend lira deposits has given Turkish savers some respite – and possibly laid the ground for an early election – it also risks piling up debt and stoking already rife inflation.

Danske Bank wrote As the currency-crisis continued in Turkey, USD/TRY dropped from nearly 18.50 to 12.5 during yesterday (stronger TRY), settling at some 13.40 and hence spot dropped some 30% in a matter of hours. The drop is reportedly due to Erdogan effectively offering to floor TRY-deposits at zero percent returns against some other currency. Details, if any, appear very sparse in international media and we are quite doubtful this is the end to the current Lira story. We speculate the extreme (even for TRY) move in Lira should be viewed on the back of two channels 1) this is the first time that official policy makers (Erdogan) is indicating that some sort of political pain-threshold has been reached and 2) that stop-losses were hit on the way, substantially amplifying volatility. The key to determining when TRY is done dropping some 5% daily is to determine where/when the political winds change.

On Friday, its researchers added: USD/TRY volatility set to continue. Tentative signs of Erdogan seeing TRY weakness as a problem may aide in s/t stabilization.

According to al Jazeera, some economists have said the new measures are effectively veiled rate hikes that may not ultimately stem the selling pressure while straining the back-stopping Treasury.

“It can have dangerous consequences,” said Refet Gurkaynak, head of Bilkent University’s economics department, in Ankara.

“The Turkish lira … had the mother of all rallies overnight, falling 11 percent intraday, but finishing the overnight session more than 20 percent higher after President Erdogan announced new policy measures to protect the lira savings from currency depreciation,” Halley said.