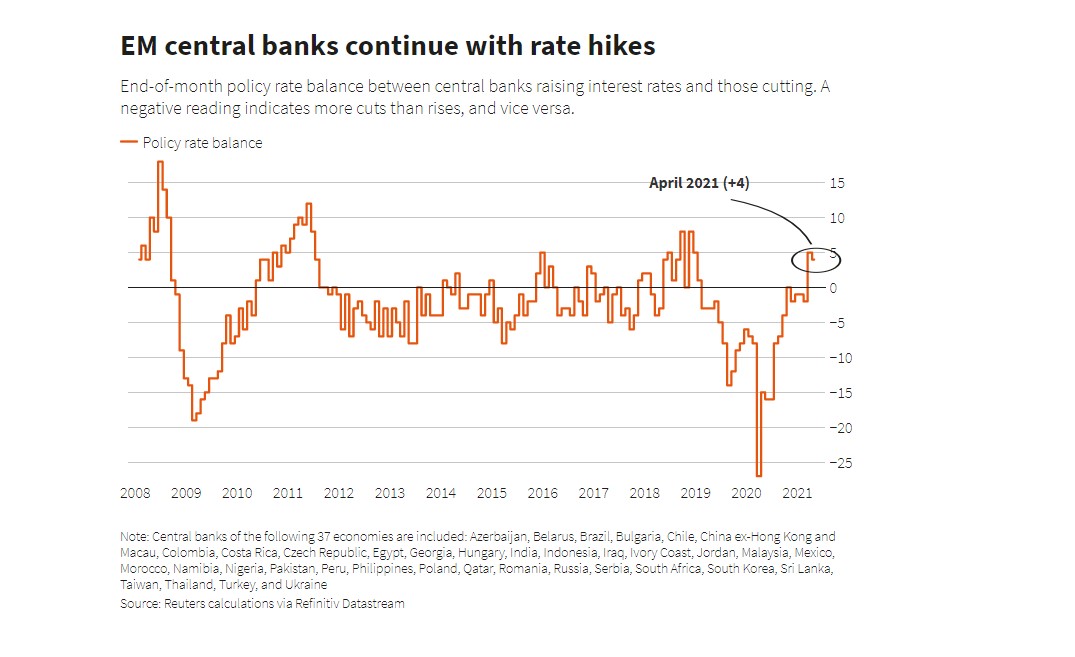 While Turkey’s  Central Bank held its policy rate at 19%, Brazil’s succumbed to inflation pressures, lifting its benchmark interest rate by 75 basis points and promised another hike of the same magnitude in June as it moves to bring inflation forecasts back down to target.

According to Reuters, Emerging Market (EM) central banks delivered more rate rises than cuts in April, marking the end of an easing cycle that had started in 2019 as central banks, especially in emerging Europe and central Asia, grapple with rising inflation pressures.

Policy makers across a group of 37 central banks in developing economies delivered a net four interest rate hikes in April after recording a net five increases in March.

“Following the most aggressive monetary easing cycle in EM history since the onset of the pandemic, the tide is now turning, with reflation concerns pushing EM central banks into a more hawkish stance on average,” said Ehsan Khoman, head of emerging markets research at MUFG Bank.

The action was concentrated in emerging Europe and central Asia, where Belarus, Ukraine, Russia, Kyrgyzstan, Georgia and Tajikistan all raised their benchmarks – the latter two now offering interest rates close to or in double digits.

“The rate of inflation has picked up in much of the region, prompting monetary policy responses,” Paul Gamble, head of emerging Europe at Fitch Ratings, said in a recent note to clients.

The moves were chiefly driven by food inflation. World food prices rose for a 10th consecutive month in March, hitting their highest level since June 2014.

But lately, rising energy and commodity prices have added to the pain. Many analysts predict more rate hikes ahead in emerging Europe and central Asia, but also in Latin America and elsewhere.

The balance between rate hikes and cuts across the group of 37, by Reuters calculations, was negative or zero for two years up to February 2021, in what was the longest easing cycle since the 2008 financial crisis and the 2010 euro crisis.

At the peak of the cycle in March last year, 27 of the 37 central banks cut interest rates, trying to protect their economies as the fallout from the coronavirus pandemic rippled through markets around the world.

Regarding Turkey, no monetary easing ought to count as “monetary tightening”, because the new governor Prof Sahap Kavcioglu was specifically appointed to deliver lower rates.

India is another country grappling with rising inflation pressures amidst a horrendous Covid-19 scourge. “Rate cuts are unlikely at the moment unless the growth outlook deteriorates substantially,” said Rahul Bajoria, senior economist at Barclays Bank Plc in Mumbai. “So while the Monetary Policy Committee will keep a dovish bias, they are likely to rely on unconventional policies going forward”, quoted Bloomberg. Yet, Turkey had demonstrated year after year that unconventional policies in open economies with weak Central Bank credibility don’t work.

Rate hikes stabilize local currencies vs the dollar, raising the country’s attractiveness for carry traders and hedge funds.  This strategy works until and unless Fed is forced—in the face of inflation pressures—to bring forward its QE exit plans.

Those Developing Nations which sacrifice exchange rate and price stability to keep economic momentum going, could lose FX reserves gradually, as financial funds migrate to others with higher bond yields and stable currencies.

At the end, the Great Monetary Easing Cycle has ended in EM.  How soon it will morph into the Panic Tightening cycle will be determined by food and  commodity prices, as well as American inflation.